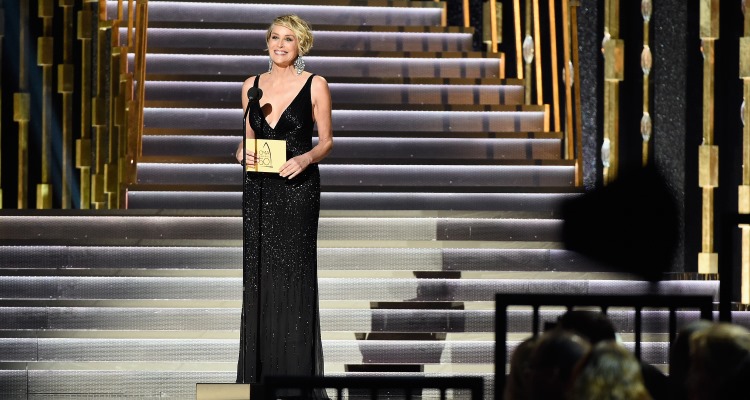 It’s been a while since anyone has seen Sharon Stone on the red carpet, or anywhere for that matter, but the ‘90s icon looked simply amazing in a plunging black gown at the Country Music Awards on Wednesday! And since the Basic Instinct star looked timeless at the event, many have been questioning how she has maintained her looks over the years. Many have been searching terms such as “Sharon Stone plastic surgery,” “Sharon Stone age,” and “how tall is Sharon Stone?” So, if you’re looking for all the answers you need about Sharon Stone, then look no further, because we have just what you need right here!

Sharon Vonne Stone was born on March 10, 1958 in Meadville, Pennsylvania to Dorothy Marie (nee Lawson; b. 1933) who was an accountant, and Joseph William Stone II (1930-2009), who was a factory worker. She has a sister, Kelly and two brothers, Michael and Patrick. Sharon graduated from Saegertown High School in Saegertown Pennsylvania, in 1975. While she was attending Edinboro University, Sharon won the Miss Crawford County, Pennsylvania title and was a candidate for Miss Pennsylvania. Sharon eventually left home and joined the Ford Modeling Agency in New York City, before becoming an actress.

Sharon was married to her first husband, television producer Michael Greenburg from 1984 to 1990. They first met on the set of The Vegas Strip War, a television film he shared and produced, with Sharon as the starring role.

Stone had two more engagements after that: Actor Bill MacDonald left his wife for Sharon, but they separated and ended their engagement in 1994. Sharon was also engaged to director, Bob Wagner, which later ended in 1995.

Since Sharon is unable to conceive a child, she and Phil adopted a baby boy in 2000— Roan Joseph Bronstein, when they were married. But then things went downhill for their relationship as Phil initiated the divorce and filed for irreconcilable differences. He was granted primary custody of Roan and granted Sharon visitation rights. 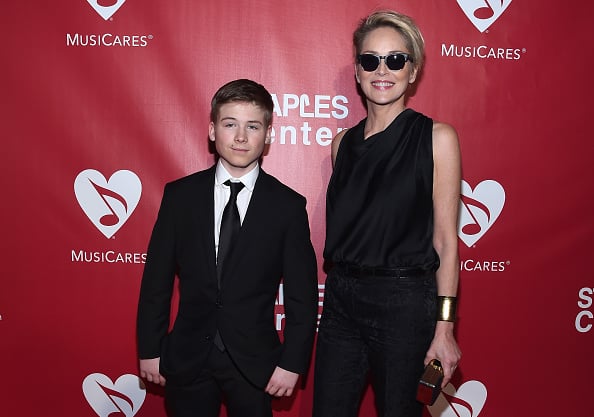 Many have been wondering how the 58-year-old, 5’9 actress has been able to maintain her youthful looks over the years, especially after she graced the CMA red carpet on Wednesday and stunned people with how great she looked! Has Sharon Stone had plastic surgery? Surprisingly, the actress has not had any work done, but has struggled with the idea of going under the knife.

In a 2013 New You magazine interview, Sharon said: “I can’t tell you how many doctors try to sell me a facelift. I’ve even gone as far as having someone talk me into it, but when I went over and looked at pictures of myself, I thought, what are they going to lift?” 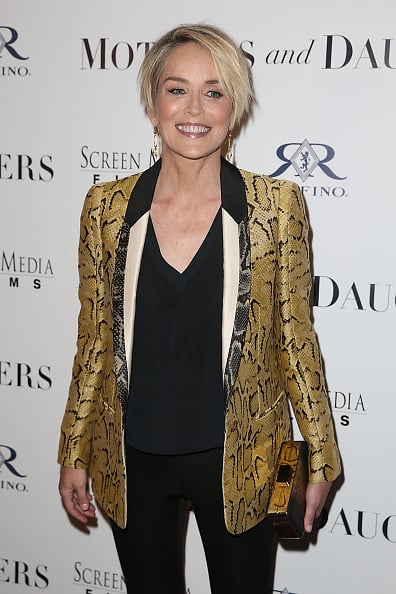 Sharon walked the CMA red carpet on Wednesday in a stunning black dress with a plunging neckline that brought a taste of Hollywood glamour to the event. And she wasn’t alone either—Sharon brought her sister Kelly as her date for the big night! Sharon presented Chris Stapleton with the Best Male Vocalist Award.

A Little Something for Your Birthday

According to The Hollywood Reporter, Sharon was busy filming her new movie, A Little Something for Your Birthday, last week in Los Angeles. The coming-of-age comedy sees Sharon play a woman struggling to escape the grasp of her co-dependent, overbearing mother, played by Ellen Burstyn. Scandal star, Tony Goldwyn will play a “sexy, sophisticated attorney” who captures Sharon’s heart. Famke Janssen (How to Get Away with Murder), Caitlion Fitzgerald (Masters of Sex), and Liza Lapira (Crazy Stupid Love) also star in the upcoming film. (If all goes well, Sharon’s $60.0 million net worth will get an increase, not that she needs it!)