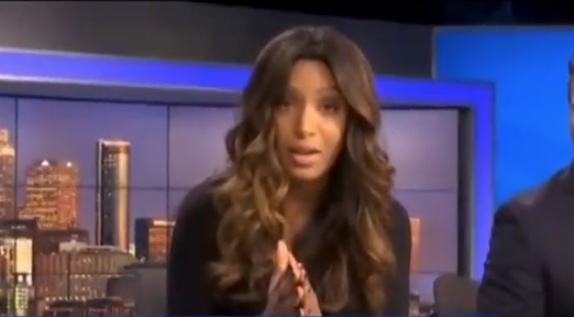 Sharon Reed is a local reporter with a CBS affiliate in Atlanta who is fairly well known in her neck of the woods. But on a whole, she isn’t well known to those outside of the Peach State. That is, until today when Reed simply and effectively put down a viewer’s racist remarks. In this Sharon Reed wiki, you’re going to learn everything you need to know about news anchor Sharon Reed, her Atlanta time, as well as where she came from and where you may have heard of Sharon reed before.

Sharon Reed’s age is currently unknown but we believe that she was born on May 12. She maintains a number of social media accounts. Sharon Reed’s Instagram isn’t updated as often as her Twitter is. In terms of schooling, Reed graduated from the Medill School of Journalism at Northwestern University. Shortly after university, Reed ended up as the sideline reporter for the Cleveland Cavaliers as part of CBS affiliate news team. A little while later, Sharon Reed’s baby, Ava, was born. And this is where you may have heard of Sharon Reed before.

Reed had made minor stirs in the news before. She had participated as part of a nude art piece, along with 2700 other Cleveland residents, for a piece by artist Spencer Tunick. But when Reed left CBS19, two months after going on maternity leave in January of 2012, a small rumor started on the Internet quickly became a big one. A small piece that was only available for 90 minutes on a gossip website, spread across the web like wildfire. The rumor stated that Reed’s unknown baby daddy was none other than the very married LeBron James! While letters from her lawyer were set to various places to order the story be taken down, once a story is unleashed on the Internet, it is very hard to make it go away. Reed has denied the LeBron story ever since and has often mentioned how the harder she denies the story, the more it seems like she’s lying.

Recently she made the news again, but this time for something legitimate. A woman named Kathy Rae emailed Reed quite the letter, accusing Reed of race-baiting and then went on to insult Sharon Reed’s race, referring to Reed as the n-word! The email and response between Kathy Rae and Sharon Reed could have turned even uglier very quickly given Rae’s word preferences. Reed, to her credit, read from the email and responded with a dignity that many people, broadcaster or not, may not have had. Reed ended her response with:

“When arguing with somebody you have to be careful not to mischaracterize their viewpoint, so I won’t mischaracterize your view either, Kathy Rae. I get it. On December 5, 2017, you think it’s OK to call this journalist a ‘n****r’. I don’t. But I could clap back and say a few things to you. But instead, I’ll let your words, Kathy Rae, speak for themselves. And that will be the last word.”

The simple response started spreading across the Internet due to it’s simple and definite shut down of Kathy Rae. At the end of this conflict, Sharon Reed is standing tall with the public standing behind her. Kathy Rae, on the other hand, has yet to return fire from behind her desk but after the savage beating she took in public opinion, she may want to keep her head down, at least for now.