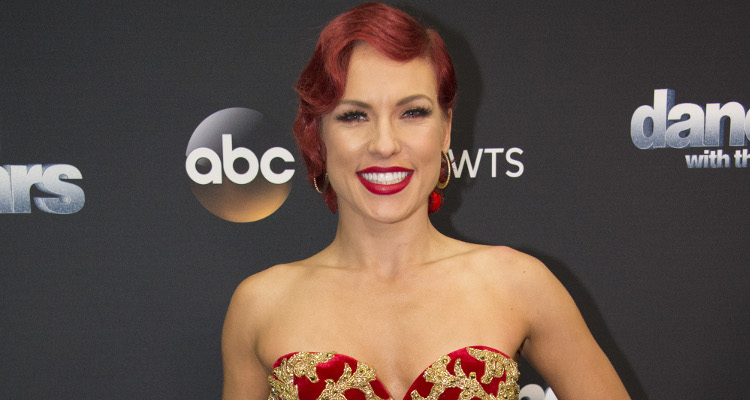 Sharna Burgess and Derek Fisher performed the cha-cha to “The Fresh Prince of Bel-Air”  theme song for Guilty Pleasures night on Dancing with the Stars. If you want to know more about the Australian dancer, then take a look at our Sharna Burgess wiki.

Born on June 21, 1985, in Wagga Wagga, New South Wales, Australia to Ray and Lucy Burgess, Sharna Burgess’ age is 32. She revealed that she was a tomboy growing up, and at the age of five, fell in love with dance and decided to take ballet, gymnastics, and jazz ckasses.

At the age of eight, Burgess learned ballroom dance, and participated in several local and national titles. In fact, she even performed at the 2000 Sydney Olympic Games’ closing ceremony!

After watching her on Dancing with the Stars for so many seasons, people want to know if the 32-year-old dancer has a boyfriend. Burgess was in a relationship with fellow dancer and choreographer, Paul Kirkland from 2010 to 2015. While paired with Bonner Bolton last season, fans thought that the two took their on-stage chemistry off-stage, but the two revealed that they were both single.

It was reported that Burgess was dating model and actor Pierson Fodé after a source revealed that “Sharna and Pierson are together. She just took him to that James Hinchcliffe race they both posted about on Instagram and were acting affectionate like a couple there,” adding, “She was at Pierson’s birthday party last week. He even visited her while she was on the road during the DWTS tour months ago.” However, neither Burgess or Fodé confirmed the relationship, so for now, it is just a rumor.

Sharna Burgess on Dancing with the Stars

These little @Sugarbearhair gummy bears are my secret weapon against all the styling my hair goes through on #dwts. It's a good thing they are yummy too ☺️ #sugarbearhair #ad

Burgess always loved dancing. So when she turned 18, she moved to London and joinedSimply Ballroom. Additionally, she has participated in the Australian versions of Dancing with the Stars and So You Think You Can Dance. Burgess joined the U.S. version of DWTS in season 16 and is still going strong in season 25.

Throughout her career with Dancing with the Stars, she danced with celebrities like Andy Dick, Keyshawn Johnson, Charlie White, Tavis Smiley, Noah Galloway, Nick Carter, Antonio Brown, and James Hinchcliffe. Currently, Burgess is paired up with basketball coach and former player, Derek Fisher.

Hi beautiful people!! Thank you so much for all the love and positivity last night and this morning. We are so grateful to have your support for #teamhoopsandheels and we love ya right back!!! Now Remember you can still vote all the ways for this guy!! And we really need your votes because we want to stay till the end!!! Call 1800 868 3403 Online http://dwtsvote.abc.go.com Facebook http:// dwts fb.votenow.tv/

Last time on DWTS, Burgess and Fisher performed a cha-cha to “The Fresh Prince of Bel-Air” theme song, as the former Laker’s point guard’s guilty pleasure is the popular ‘90s sitcom. The judges all loved their performance and the pair scored a 21 out of 30.

If you missed out on Sharna Burgess and Derek Fisher’s incredible performance, then you can watch it below, and let us know your thoughts in the comments below. Tune into ABC Mondays at 8:00 p.m. EST to watch some amazing dances, and see who gets eliminated!