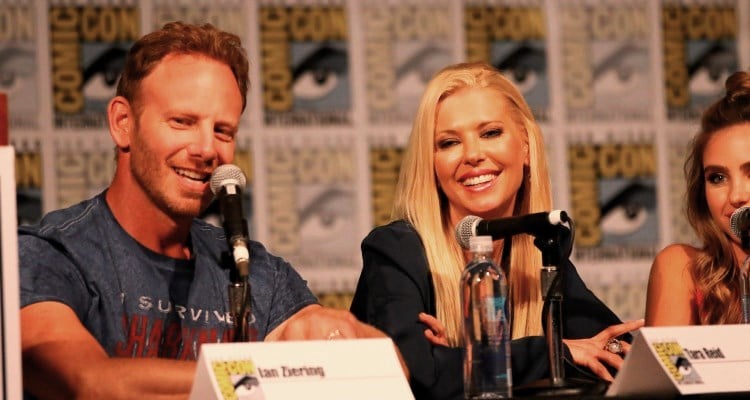 We can’t believe we’re saying this either, but Sharknado 4: The 4th Awakens aired last night on Syfy; yes, the surprise made-for-TV film series has made it to movie number four, in case you were wondering what the #Sharknado4 tag in your feed was all about. But what may surprise you even more is all the Sharknado 4 cameos, given how many celebrities actually made an appearance in the film! Just how many people in the Sharknado 4 cast are you familiar with? Who’s playing a character and who appears as themselves? Here’s some info on the cast of Sharknado 4 and who you may have missed had you not been watching last night!

The Sharknado franchise is a series of low-budget disaster films featuring a very unlikely disaster: the titular “sharknadoes,” which are, as the name implies, tornadoes filled with sharks. This phenomenon is explained in the first film as being caused by tornadoes that happen to catch and suck up sharks from the ocean on their way to populated areas, at which point the sharks and water are then deposited on land, causing flooded areas with sharks swimming around in them. If this sounds hard to believe, keep in mind that these films are basically B-list movies—and then suspend disbelief further when the sequels show it happens at least three more times.

Ian Ziering and Tara Reid star in the series as Fin and April Sheppard, a married couple that keeps ending up wherever a sharknado occurs. Their family has expanded over the course of the series, with the Sharknado 4 cast list including the couple, their siblings, their parents and more. Besides the three direct sequels, the first film has gone on to spawn two spinoffs, including one about fire-breathing tarantulas. There is also a book, a mobile game for iOS, and a comic book crossover with Archie, where Riverdale was hit with an entire Sharknado storm!

The latest film, Sharknado 4: The 4th Awakens comes after years without a reported sharknado, which have allowed the Sheppards to live in peace and raise their newborn son. However, peace makes for a boring movie, so it’s not long before a new sharknado appears, this time targeting Las Vegas.

The film’s name (as well as its promotional poster and the actual movie’s intro) are all based on Star Wars: The Force Awakens. In case you were wondering, no, this does not mean that the cast goes into space to fight a massive sharknado; they did that last movie, except it was classified as a “sharkicane.” Yes, really.

It’s said that a Sharknado movie can live or die by its cameos, and the cameos in Sharknado 4 are no exception. While many of the Sharknado 4 cameos are from celebrities who don’t enjoy the same level of fame as they used to—for instance, comedian Carrot Top plays an Uber driver—there are still some surprisingly big names in the film. Vegas regular, Wayne Newton makes an appearance and there’s also a strong reality show contingent with Duane “Dog the Bounty Hunter” Chapman selling Fin his weapon of choice, a chainsaw. Four Real Housewives (two from Beverly Hills, including current star Erika Girandi) and two from Atlanta also make an appearance in the film. You can find plenty of guest star lists online, including this one from the official site.

While a lot of the Sharknado 4 cast was announced prior to the film’s release, the best announcement came from, of all places, WWE. A tweet by the company featured Seth Rollins (who will be co-headlining Summerslam this month) talking about his role in the film as a member of the “Astro-X” team. In the clip, “The Architect” revealed potentially the best spoiler of all time: that a sharknado in which the sharks were also on fire would assault Mount Rushmore. If that doesn’t make you want to watch a replay of this movie, we don’t know what will!