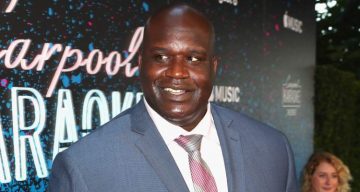 Shaquille O’Neal is one of the richest retired athletes with an ever-increasing net worth of $400.0 million. Since hanging up his jersey, this gentle giant has branched out to music, acting, law enforcement, pro-wrestling, and now late night show host.

Legendary NBA superstar, Shaquille O’Neal has enough dough to swim in a pool of Halloween candy. That doesn’t stop this ubiquitous multi-talented athlete to ask parents to steal their kids’ Halloween candy. Shaq made his late night show debut filling in as host for Jimmy Kimmel Live and kicked off Kimmel’s annual Halloween prank. O’Neal has a net worth of $400.0 million from his multiple ventures. Here’s a breakdown of his wealth in Shaquille O’Neal’s net worth.

How Rich is Shaquille O’Neal?

Very rich, to put it simply. He has a net worth of $400.0 million, a spike from last year’s $350.0 million. Since beginning his career in 1992 to his retirement after the 2011 season, his NBA earnings alone surpassed $280.0 million. The following table illustrates the various earnings that came with his accolades.

Born Shaquille Rashaun O’Neal on March 6, 1972, he is most commonly known as Shaq. The NBA stalwart towers at an astounding height of 7’11”!

Raised in New Jersey to Lucille O’Neal and Joe Toney, Shaq’s biological father was not in the picture growing up. Toney was addicted to drugs and served jail time when Shaq was a baby. For the better part of his life, Shaq remained estranged from his father. He never contacted Toney nor did have any inclination to reconnect. He even apparently dissed his father in a rap.

Upon his release from jail, Toney gave up his parental rights to Shaq’s stepfather, Phillip A. Harrison, a career Army Reserve Sergeant. Because of Harrison’s job, they traveled a lot and even stayed in places like Germany and Texas. After the death of Harrison, O’Neal and Toney met for the first time in March 2016 and made amends.

Shaq credits the Boys & Girls Club of America for keeping him off the streets and out of trouble.“It gave me something to do,” he said. “I’d just go there to shoot. I didn’t even play on a team. It always gave me somewhere to come. I could do my homework there. It gave me a lot of opportunities.”

He repaid the after-school program years later by donating $1.0 million to the club and getting tech giants like Microsoft and Compaq to set up technology centers in clubs across the country.

He was awarded the NBA Rookie of the Year title in 1993. In total, he played in 15 All-Star games and won 14 All-NBA Team selections (an honor given to the best players of the season), three NBA All-Defensive Team selections (similar to the All-NBA selections but just for defensive players), three All-Star Game MVP awards, and many other major NBA titles. That’s quite the resumé!

In 2000, he also became one of the only three NBA players to have earned the NBA MVP, Finals MVP, and All-Star Game MVP title in the same year. His performance was spectacular when he played for the Los Angeles Lakers and Miami Heat. Most of his estimated net worth has come because of his successful NBA career.

The 45-year-old is one of the highest paid retired athletes in the world for good reason. Even after retiring, he inked deals and kept himself busy which make him extremely wealthy.

Besides being a basketball player, Shaq is also a famous actor. He made several appearances on radio stations, in television shows, and in the music industry.

He even recorded rap albums. His debut album, Shaq Diesel, was a a big hit and went platinum in 1994. He released four more studio albums, plus another compilation album. Despite having great reception, his music career never really took off.

The freshly debuted late night show host got married to Shaunie Nelson in December 2002 and they are parents of four: Shareef, Amirah, Me’arah, and Shaqir. Shaq also has a daughter with his ex-girlfriend, Arnetta Yarbourgh.

Five years after his marriage to Shaunie, Shaq apparently filed for divorce on September 4, 2007. However, Shaunie later denied the news and the couple claimed that the divorce was withdrawn, and they were very much still together.

Then, on November 2009, it was reported that Shaunie filed for an “intent to divorce,” citing irreconcilable differences. Post his divorce, it has been reported that Shaq started dating reality TV star, Nikki “Hoopz” Alexander until 2012.

Financial documents from their divorce proceedings revealed that Shaq spends a whopping $1.3 million a month. A major chunk of it goes to income taxes, mortgages, and vacations. He also spends a lot on his children.

He once revealed that when he made his first million at the age of 20, he spent it all less than an hour after signing his professional contract. “The first thing I wanted to do was relieve my parents of their jobs,” he said about the house and dream cars (Mercedes-Benz) he bought his parents and himself.

A Finger in Every Pie

Like any other basketball player, Shaq earns a huge amount of money from endorsements and brand promotions. It was reported that he charges around $9.0 million to attach his name to a brand. He endorsed products such as the Icy Hot pain relief patch, the fuel-efficient Buick LaCrosse, and The Original Soup Man. He also appeared in various ads for Nestlé Crunch candy bars, Gold Bond, Pepsi, Taco Bell, Burger King, and Vitaminwater.

He inked a partnership with Reebok in 1992 that is still going strong. With the fitness brand, he launched his designated sneakers like the Classic Shaq Attack (1992) and Classic Shaqnosis (1995).

He also keeps the money coming with snazzy investments in companies like Apple, General Electric, and PepsiCo. On top of that, he invests substantial amounts in real estate. Along with investing in startups and e-media companies, he has minority stakes in the Sacramento Kings.

When you’re Shaq, you live fancy. He owned a 70,000-square-foot, $250.0 million waterfront estate outside Orlando, Florida, which has 11 bedrooms, 13 baths, a 20,000-square foot indoor basketball court, and a garage for all of his custom-made cars.

His newest splurge is a sprawling estate in Atlanta with a price tag of $1.15 million. The property comes with two homes, the main one a traditional brick-lined structure equipped with a 12-seat home theater, among other amenities. The two houses combined have eight bedrooms and 10 bathrooms.

The Hall-of-Famer is known to buy the mortgages of those who had fallen to foreclosure and sell it back to the residents under more affordable terms. He makes a minor profit from the sale but his aim is to save homeowners from foreclosure.

Shaq certainly has a heart bigger than his gigantic frame!