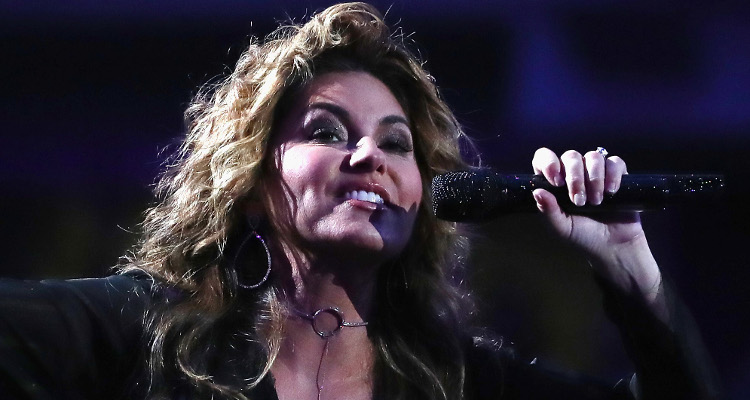 Shania Twain appeared as a guest judge on Dancing with the Stars to promote her newest album, Now. She stunned the audience with her newest song “Soldier” and joined the judges’ table. Almost overshadowing her performance are Shania Twain’s plastic surgery rumors. Read on for more on whether or not the singer had work done.

What happened to Shania Twain? If you are a fan of the singer, then you might have noticed that her appearance has changed a bit over the years. Many people are weighing in about Shania Twain’s before and after pics, and though the change is not in-your-face, there is a speculation about the songstress having work done. Did Shania Twain get plastic surgery? Find out more right here.

What Happened on Dancing with the Stars Last Night?

Last night, Dancing with the Stars was full to the brim with Hollywood and movies. The “Night at the Movies” theme is one that fans always look forward to, and this season’s contestants did not disappoint. While the audience was ready with popcorn and candy, there was a lot that proved to be amazing. Like when Lindsey Stirling and Mark Ballas scored a perfect 40/40. The judges were head over heels for their dance representation of sci-fi, and the audience thoroughly enjoyed the robotic-mad scientist mashup.

Though there was speculation that Vanessa Lachey would leave the ballroom this week, she redeemed herself last night. She and Maks Chmerkovskiy entertained the audience and judges with their routine to the musical genre. They received a score of 36/40, which they, along with their fans, were happy with.

While it was almost a perfect night for Jordan Fisher and Lindsay Arnold, Len Goodman’s 9/10 made their total score 39/40. They gave a fantastic performance to the drama genre and guest judge Shania Twain even saw that they were effortless.

The rest of the contestants sailed through, and it all came down to Nick Lachey and Victoria Arlen. In an expected elimination, Nick Lachey said goodbye to DWTS season 25.

Did Shania Twain Get Botox?

However, the highlight of the show were not the dances, but Shania Twain performing her new song. And now, people are speculating if she had plastic surgery done. Twain’s most prominent features are her arched eyebrows and cat eyes. But people think the singer’s face looked a little tighter, and more voluminous last night. So naturally, Botox rumors have spread like wildfire and everybody wants to know if Shania Twain had something done.

While many agree with the fact that the superstar looks a lot different, there are some who deny that she had Botox fillers. It is speculated that 52-year-old country singer went through multiple surgeries on her face. Some doctors believe that Shania Twain had fillers under her eyes, Voluma injections to her cheeks, and had nonsurgical treatment to tone her skin.

#ShaniaNOW is already platinum in Canada! I am over the moon! Thank you for all your support, I'm really feeling the home country love ❤

Whether or not she actually had work done, Twain still looks as stunning as ever. Though there was a scare of her not being able to sing again, the star returned with a bang. She was diagnosed with Lyme disease, and was afraid that she would not be able to sing again. But the “You’re Still the One” singer proved that with hard work and lots of “very, very difficult” physical therapy, she can work to overcome her struggles.

Don’t forget to watch Dancing with the Stars season 25 Monday nights at 8:00 p.m EST only on ABC.