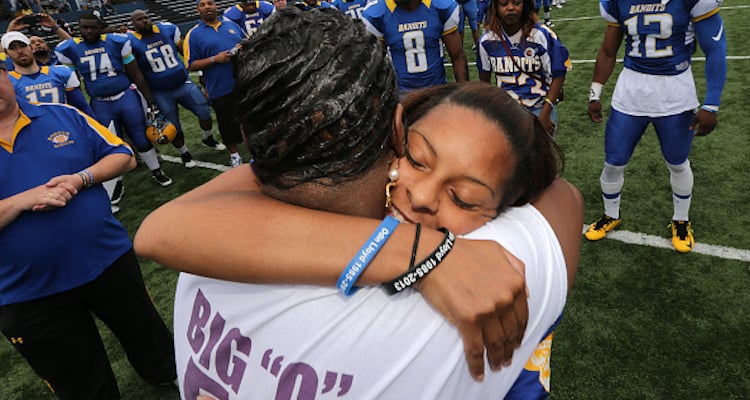 Since the news broke about Aaron Hernandez’s suicide on Wednesday, the Jenkins family has been at the center of the media storm, just as much as the Lloyd and Hernandez family has been. Shaneah Jenkins is best known as Odin Lloyd’s girlfriend before he died. If you want to know more about her, then take a look at our Shaneah Jenkins wiki.

Shaneah is Shayanna’s younger sister, but her age is unknown and there are very few pics of her online. With no sign of a social media account, this means that there isn’t a Shaneah Jenkins Instagram page. The sisters grew up together in Bristol, Connecticut, where Aaron Hernandez also grew up. Shaneah and Shayanna Jenkins were close growing up, but have been estranged ever since Aaron was convicted for the murder of Odin Lloyd.

Although Shaneah’s sister goes by Shayanna Jenkins-Hernandez, she never actually married the late former NFL star. They grew up together in Bristol and were high school sweethearts. Shaneah is an aunt to their 4-year-old daughter, Avielle Janelle Jenkins-Hernandez. Avielle also shared the same birthday as her late father and her parents were planning to get married, but never did.

Shaneah and Odin were dating before he was murdered. They went on  trips with her sister and Aaron and Lloyd’s family loved her. When she found out that Lloyd had been killed, she was devastated and grieved with the family. When Shaneah and Shayanna went to court for all of Aaron’s trials, they sat on opposite sides of the court room and have been estranged ever since. Shaneah’s testimony matched court documents and she went to her sister’s house after she heard about Odin’s death. Court documents stated that Shaneah believed her sister was being secretive when she went by the house.

According to TMZ, Aaron cheated on his fiancée Shayanna, before he went to prison to serve his life sentence. It’s unclear when the affair took place, but she found out about them on his cell phone. Shayanna, however, looked the other way and forgave him.

“I made a decision that if I was going to move back in with Aaron that I would have to compromise on his behavior, and that included infidelity and everything that came along with it,” she said. “I decided that it was worth fighting for, so I moved back.”

Shaneah Jenkins is now close with Lloyd’s sister, Olivia Thibou. In Thibou’s cell phone, Shaneah is referred to as “My Little Part of Odin,” according to the Bleacher Report. After hearing about Aaron’s death, Olivia cried and wrote a message on her private Facebook account.

“This morning I woke up, tears in my eyes..today 2 years ago almost around this exact time. Leonard (her fiancé), Chance (her son) and I were riding to the courthouse when Brandon Ferris called to tell me a verdict came in. I didn’t think it would come that early in the day. Knowing we weren’t going to make it on time, I plugged my phone to the auxiliary and watched the verdict being read live. Holding Leonard’s hand I screamed out and cried when madame foreman announced guilty for murder! I watched my mom, sister Shaneah, uncle and aunts break down in tears. I got to the courthouse ran through the cameras hugged Brandon and just cried! [sic]”

It’s unclear if Shaneah and her sister are going to begin talking to each other again, but both sisters have now lost someone they loved. News of Aaron Hernandez’s suicide is still circulating and there is even talk from his lawyer suspecting foul play, despite police reports.