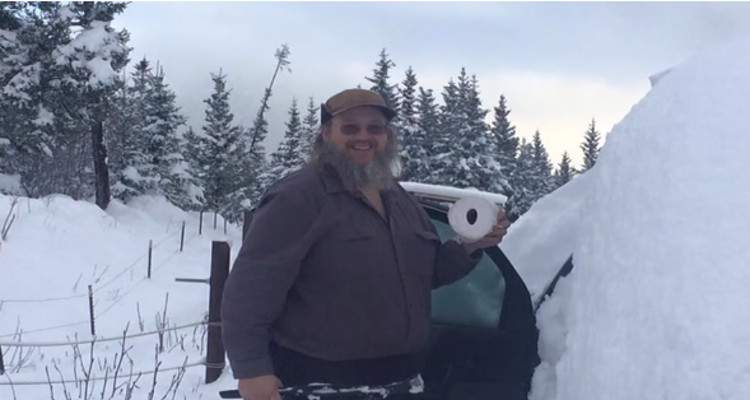 The Kilcher family have fascinated viewers with their simple living in the Discovery Channel’s Alaska: The Last Frontier since it first premiered in 2011. Fans of the reality show welcomed the Kilchers back on television when season 7 premiered in October. But, a few episodes in, Shane Kilcher was seriously injured in an accident. Those new to the show want to know what happened. We’ve got the scoop.

A heartbreaking post appeared last week on the Facebook page for Alaska: The Last Frontier. The reality show, that chronicles the Kilcher family’s off-the-grid life, had some sad news to share with fans. Shane Kilcher, who was building a house for himself and his wife Kelli, was very badly hurt and had to be taken to the hospital.

What happened to Shane Kilcher from Alaska: The Last Frontier? How bad is Shane Kilcher’s injury? We’ve got everything you need to know, right here.

Here’s a little introduction to Shane Kilcher from Alaska: The Last Frontier. He is one of Atz Kilcher’s sons. Atz’s parents, Yule and Ruth Kilcher, came to Alaska from Switzerland over 80 years ago. They set up a homestead on over 600 acres of land a few miles outside of Homer, where they settled.

The Kilcher clan continue to live in the same area. There is no running water, electric supply is intermittent, and they have a few months to get their food and animals ready for Alaska’s harsh winters.

Did you know that Shane is one of Grammy-nominated singer Jewel’s brothers? He and his wife live on the homestead. Fans of the show have been following Shane and Kelli’s journey as they build their own home together.

“There’s still a whole lot left to do.” The freeze is coming but Kelli and Shane have made impressive headway. #AlaskaTLF pic.twitter.com/iWpecqOd00

What Happened to Shane?

Last week’s post shocked fans who were hoping to see more progress on the new home.

A video in the post showed a tearful Kelli sitting by Shane’s hospital bed at Central Peninsula Hospital. She explained what happened in the short clip.

“We’re in the hospital in Homer, and Shane fell off the ladder and broke his back. Big, strong Shane. He’s the big strong one. He is supposed to do everything. How bad is it? How bad is it going to be in the long run and what’s that gonna mean?”

She added, “He’s not moving, and if he’s not gonna be able to get around, and he’s supposed to take care of things, and he does all the heavy lifting, and he’s doing all the building, so….”

Shane Kilcher’s accident occurred after he fell off a ladder while working on his house. The fall caused a deep fracture of his L2 vertebra.

Shane Kilcher’s fall reminded fans of Atz Lee’s accident two years ago, when he fell from a 40-foot cliff and was rescued by a chopper before being taken to a hospital. Lee had several broken bones and other injuries, but his family was there to support him throughout the recovery process.

The producers of Alaska: The Last Frontier haven’t provided any more details on Shane’s injury, but it looks like he is doing well and is receiving the care he needs.

The couple expressed thanks to their fans on their Facebook page saying, “Thank you to all the amazing fans of Alaska: The Last Frontier for all the prayers and kind wishes! Shane is doing well but has a long recovery process ahead of him. The hardest part we hope will be getting him to take it easy and slow!”

Keep watching Alaska: The Last Frontier for more Shane Kilcher updates. Our thoughts and prayers are with him as he recovers, and we hope he will soon rejoin the other Kilchers in their Alaskan adventures.