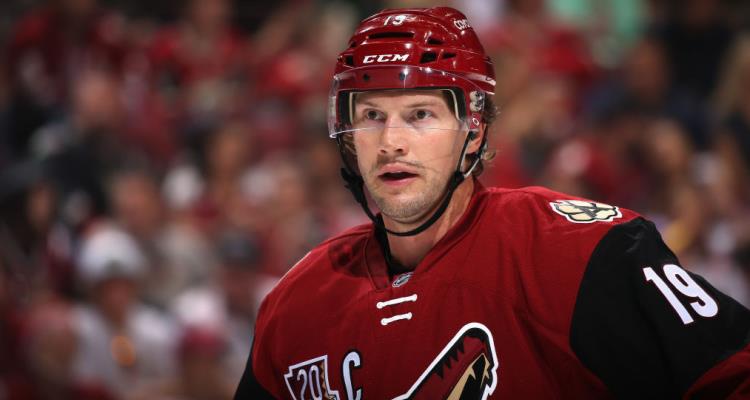 Former hockey player, Shane Doan, announced his retirement on Wednesday. Now, fans are looking for Shane Doan’s net worth and Shane Doan’s contract, as well as any other details about the famous hockey star. If you want the scoop on Shane Doan’s retirement, then you need our Shane Doan wiki. Keep reading!

Shane Albert Doan, 40, was born on October 10, 1976, and is a Canadian hockey player born to Bernie and Bernice Doan. He is best known for being captain of the Arizona Coyotes, after switching from the Winnipeg Jets. Shane Doan’s wife is named Andrea, whom he has been married to since 1997. Together, they have four children; Gracie (born December 17, 1998), Josh (born February 2002), Karys (born July 23, 2004), and Carson, their youngest (born September 2006).

Fun fact: Shane Doan and Carey Price (the goaltender for the Montreal Canadiens) are cousins!

Another fun fact? Shane Doan and his brother Brook were once contestants on the TV show Mantracker, and the two were successful at beating Terry Grant! A feat many on the show never accomplish!

In a bittersweet announcement in the Arizona Republic, Doan broke the news on his retirement from the Coyotes.

“I could not fathom at the time that I would end up playing in Arizona for the next 21 years, raise a family and call this place home,” Doan wrote. “But that’s exactly what happened. And that’s why this has been one of the hardest decisions I’ve ever had to make. I’m retiring from the NHL.”

His team posted a lovely message to him on the Arizona Coyotes Instagram page, with an oh-sadorablele picture of a very young Doan all suited up for a game! Check it out below!

He was a kid with a dream come true. Thanks for letting us be part of that dream, Doaner. Your love for the game, our fans, our state, and our staff will never be duplicated. Enjoy retirement Captain!

He Will Be Missed

In a statement, the Coyotes wished Doan well after the big news and congratulated him on his lengthy career.

“On behalf of the entire Arizona Coyotes organization, our fans and our corporate partners, we would like to thank Shane for everything that he’s done for our franchise over the past 21 years. Shane had an incredible career on the ice and we are very proud of everything that he accomplished in a Coyotes uniform. He will be remembered as one of the greatest captains in NHL history. Off the ice, Shane was a great ambassador for growing the game of hockey in Arizona and his contributions to the community are immeasurable. Shane will be a Coyote for life. Thank you Captain!”

There’s nothing fans love more than knowing that their idols appreciate them just as much as they do.

“I have peace, and I’m so thankful for that,” Doan wrote. “I’ve been blessed and I’m so grateful for the fans and their support. They stuck by me throughout my career and the ups and downs of the Coyotes. There are a lot of players with more skill than me and a lot more ability than me that didn’t ever get the type of appreciation that I got and the type of respect that the fans gave me, and I’m so grateful for that. I can’t express how much I appreciate it. Thank you for watching me grow up, and I enjoyed watching a lot of you grow up, too.

While many fans are familiar with the Shane Doan stats—in 1,540 NHL games, he had 972 points, 402 goals, 570 assists—many may not be aware of Shane Doan’s salary of $2.5 million or that he has a net worth of $36.0 million! Not bad for the young retiree! Given the fact that he now no longer has to suit up for the game, it’s like Shane Doan is doing what NHL retirees do best; relax with their families …and their millions!