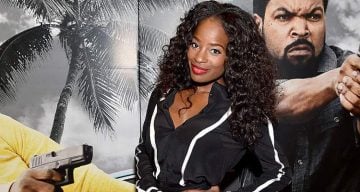 Recently, Shamea Morton sent a heartfelt tweet for her father’s birthday. The reality star has many accomplishments, so it comes as no surprise that Shamea Morton’s net worth is estimated at $2.0 million. If you want to know more about her, then take a look at our Shamea Morton wiki.

At the age of four, Morton started singing in her church choir, and was named Little Miss Tiny Star. Besides her passion for singing, Morton also took dance classes to learn hip-hop and jazz.

She studied broadcast journalism from Morris Brown College, as well as a dual psychology and sociology from Georgia State University.

On the Cheerleading Squad

Morton joined the Atlanta Hawks cheerleading squad in 2003. She cheered for the Atlanta Falcons for almost five seasons, serving as captain for the 2011-2012 season. She also danced for the Georgia Force Arena Football League for four seasons.

Her big break in both acting and dancing was in 2002 when she appeared in Drumline alongside Zoe Saldana and Nick Cannon. From there, she went on to have minor roles in various films.

Shamea Morton on The Real Housewives of Atlanta

In 2015, it was revealed that Morton would be on The Real Housewives of Atlanta as a guest wife.

With her endeavors, it comes as no surprise that Shamea Morton’s net worth is estimated at $2.0 million. She wrote on her website that, “She attributes much of her success to her faith in God, as well as her continuous pursuit of perfecting her craft.”

She made Jezebel’s annual “Most Beautiful Atlantans” list in 2011, studied improv at the renowned Nick Conti’s Professional Actor’s Studio, and took acting classes at the Alliance Theater in Atlanta.

More recently, Morton was named the official game host of the Women’s National Basketball Association’s Atlanta Dream. She is also very active in radio, filling in as an on-air personality alongside Ryan Cameron on Atlanta V-103’s, The Ryan Cameron Morning Show.

While she aspires to be a successful entertainer and multi-media mogul, Morton has not lost sight of her ultimate goal “to inspire and motivate people along the way.”

Morton is married to Gerald Mwangi, a businessman originally from Kenya. The pair decided to take their relationship to the next level by tying the knot on July 22, 2017.

The lovebirds reportedly met at a lounge in Atlanta. Morton revealed that figuring out where to live was not easy:

“He and his siblings came to the States for college. So he’s been in the States right before his 18th birthday, and he’s like, ‘No, I never want to leave Atlanta.’ That’s where all my family is, and he has all his friends here, and we just have a really great life in Atlanta. That’s where we want to raise our kids, and this is home for us.”

The couple had garden ceremony at the Fairmont Kenya Safari Club in Nanyuki. Talking about Mwangi, Morton gushed, “He is amazing. He is definitely Godsend. And they say you got to kiss a couple of frogs before you get your Prince Charming, and that is definitely what he is.”

The reality star is constantly keeping fans in the loop on social media. If you want to be updated on her life, check out Shamea Morton’s Instagram or Twitter accounts.