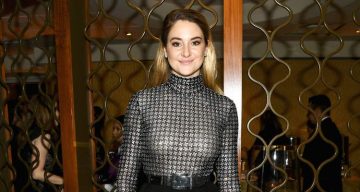 Shailene Woodley’s Golden Globes 2018 appearance with costar Ansel Elgort might have you thinking that the duo is secretly in a relationship! We hate to burst your Fault in Our Stars fantasies, but The Divergent Series star is allegedly in love with another handsome guy! So, who is Shailene Woodley dating? Well, the sizzling actress’ new-found beau is the Australian-born Fijian international rugby union player, Ben Volavola. Read all about Shailene Woodley’s boyfriend below.

Shailene Woodley has intrigued fans through incomplete love posts on Instagram over the last few months. However, it is now confirmed that the Big Little Lies actress is indeed smitten with rugby player, Ben Volavola!

Ben volavola signs with his new top 14 club in France Can you guess which club has signed him? ??

While Woodley had kept her relationship status under wraps up until now, she recently bared it all last week at her beau’s rugby practice in Auckland, New Zealand. The duo was happily seen whispering by the sidelines during breaks, and the actress was even caught passionately kissing Volavola!

Your starter for 1, (or should that be 11 ?)Ben Volavola came off the bench to make his first appearance for new club Bordeaux, but where did he play ?Clue: the French think all Fijians play there.

The couple’s public display of affection has pretty much confirmed all rumors surrounding their relationship status. And, it is quite evident that they are quite fond of each other!

Shailene Woodley’s relationship with Ben Volavola may only be a few months old, but the two lovebirds certainly seem inseparable right now!

Shailene Woodley and Ben Volavola’s relationship apparently started in in Fiji last year, where the actress was filming for her soon-to-be-released film, Adrift, while her beau was touring for one of his games. And although Woodley is a household name, not many people know much about her new boyfriend.

Ben Volavola is an established 26-year-old rugby player, who is currently playing for the French Top 14 rugby team, Bordeaux Bègles. He usually plays either as a fly-back or full-back and is known to be fierce on the field.

Shailene Woodley is no novice when it comes to dating. The dashing diva has been linked with many men in the past, including the likes of Ken Baumann and Daren Kagasoff from The Secret Life of the American Teenager, costar Ansel Elgort from The Fault in Our Stars, Jack O’Connell from 9 Kisses, and her Snowden colleague, Joseph Gordon-Levitt.

The ardent activist has also been linked with Nahko Bear, the torchbearer for Nahko and Medicine for People. She was also rumored to be dating Theo James and Ellen Page in the past.

In contrast, the actress’ new beau is only known to have dated Jacqueline Wieser before her. According to reports, Wieser apparently was “torn, heartbroken and humiliated” at the news of Ben Volavola and Shailene Woodley’s relationship.