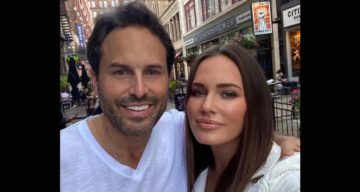 Meredith Marks quickly struck up friendships with fellow new Real Housewives, Jen Shah and Lisa Barlow. And while her jewelry business is thriving, her career and friendships are not what got our attention on the inaugural season of The Real Housewives of Salt Lake City. Meredith Marks and her husband, Seth Marks, have had their ups and downs in recent years. And things almost came to a head in 2019, before they were resolved. Their marriage is the plotline that has Mer Marks’ newest fans glued to the show. We provide more insight into their union in Seth Marks’ wiki.

Seth Marks was born on April 27, 1972 to Jeffrey and Rose Marks. Both Seth and Meredith Marks are natives of Chicago, Illinois.

He has at least one brother, Myles Marks, who is married to Diedre Marks.

Several members of the Marks family attended Highland Park High School. Seth also graduated from Highland Park in 1990, where he played basketball and football. He was also a special education assistant there.

Seth Marks earned his bachelor’s degree in sociology from the University of Arizona in 1994. According to his LinkedIn, his earliest jobs were at Hilco Global in 2000 and Big Lots Stores in 2004.

Also Read: Mary Cosby Wiki: Who Is the New Star of “RHOSLC”?

He was the CEO and president of LQW Retail in Toronto, Canada from 2007 to 2010. He successfully sold the company to Big Lots U.S.

Marks returned to Chicago in 2011 to serve as the CMO of Tuesday Morning. But it was the Utah-based retail brand Overstock.com that brought Seth and Meredith Marks to Salt Lake City in 2013.

Marks’ tenure there ended in 2015 and he returned to Chicago, first working at Sears Holdings before going back to Hilco. In January 2020, he joined IE Retail Ventures, which is based in Canton, Ohio.

The children have had fleeting appearances on RHOSLC and on Mer’s social media. Not much is known about them, except that their youngest son, Brooks, took a semester off from college to focus on his new business and their daughter Chloe is studying at the University of Colorado Boulder.

RHOSLC teases that Meredith and Seth’s marriage is on the rocks. The difficulties have cropped up since their kids went off to college and they became a couple of empty nesters.

They even briefly separated in 2019, and court records show that Seth filed for divorce. However, they worked things out and Seth withdrew the petition within four months of filing.