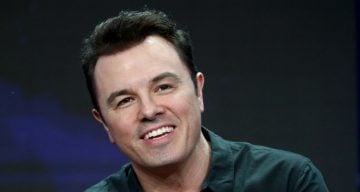 Seth MacFarlane is on a roll right now! Every project he picks up, whether in film or on TV, is working out well for him. He has great luck with the ladies as well and dated some beautiful women in Hollywood over the years. Is Seth MacFarlane married? Or is there a chance that he is currently single? We’re getting to the bottom of it, right here.

Women like funny guys who make them laugh and smile, which must be why Seth MacFarlane has such incredible luck with love. No kidding! MacFarlane has dated some of the prettiest women in Hollywood over the past few years. In February 2017, he was spotted with a mystery woman in Los Angeles on what looked like a dinner date. The gorgeous unnamed woman was seen talking and laughing with MacFarlane, as they stood outside the Italian restaurant Nerano in L.A. The brunette was seen embracing the actor as they left the restaurant. Though the paparazzi tried to find out who the mystery woman was, there was no such luck, and MacFarlane didn’t tell, either! So, who is Seth MacFarlane dating right now? Is Seth MacFarlane married? Here’s everything we know about Seth MacFarlane’s dating timeline.

Who Is Seth MacFarlane?

Seth MacFarlane is an actor, filmmaker, comedian, and singer, who is mostly known for his work in animation and comedy. He is the creator of TV shows like Family Guy and The Orville, and he is the co-creator of animated shows like American Dad! and The Cleveland Show. He also wrote, directed, and starred in films like Ted, Ted 2, and A Million Ways to Die in the West.

MacFarlane dated Game of Thrones actress Emilia Clarke from 2012 to 2013 and the two made a lot of public appearances together. Things were going great between them, but because of their busy schedules, they hardly got to spend quality time with each other. That, combined with the distance between them, contributed to the breakdown of their relationship.

The good thing is that MacFarlane and Clarke separated on amicable terms and remain good friends today. Both are enjoying their success, and MacFarlane is a big fan of Game of Thrones. According to sources, another pretty lady who was known as Seth MacFarlane’s girlfriend was Amanda Bynes. It is rumored that the two dated for a while in 2008. This was around the time that Bynes voiced a character on Family Guy, which is where the two are assumed to have met. MacFarlane was also rumored to be dating another young actress, Eliza Dushku, in early 2008. Dushku became famous for her role in the TV show Buffy the Vampire Slayer, as well as her roles in True Lies, Bring It On, and the cult slasher flick, Wrong Turn.

#TBT one of my 1st photo shoots ever, fresh & thoroughly confused after moving from NC to LA. ???couldn't actually find more than three bikini shots for #nationalbikiniday LOL ? @marcelphoto

According to some sources, MacFarlane also dated actress Alexis Knapp sometime in early 2012. At the time, Knapp was pregnant with her child whose father was her then-boyfriend Ryan Phillippe. She was reportedly still pregnant while dating MacFarlane.

It is not surprising that all these beautiful ladies fell for the actor’s charm over the years. After all, he is talented, industrious, and has a great sense of humor! So, who is Seth MacFarlane’s girlfriend in 2017? There is currently no information on that so we don’t know if he is single or not. We do, however, know that he is not married. So, good news for the ladies: There is a good chance that he’s available!