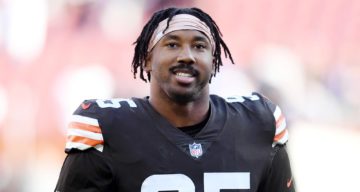 Myles Garrett is a star footballer for the Cleveland Browns of the NFL, and his love life has always been in the news. Especially in the years since it’s become known that the special woman in his life is the college-educated nutrition expert Serra Tumay. While Tumay prefers to keep a low profile, fans are eager to know more about who Myles Garrett’s girlfriend is. She is of Turkish origin and has been working with college athletics departments to improve the nutrition of high-performing athletes. She has an independent career of her own and fans are always eager to know what’s happening in Myles Garrett and Serra Tumay’s romantic relationship. Read on to find out.

Many people believe that American football stars have the best girlfriends. These athletes are talented, famous, celebrities, rich, and live a larger-than-life life, so they’re commonly considered “chick magnets”! Jokes aside, over the years, NFL players have been linked with beautiful and glamorous women, and Myles Garrett is no exception.

Garrett plays for the Cleveland Browns and is always in the news for his fantastic contributions on the field. Inevitably, his love life is also a matter of great interest to his fans and celebrity watchers, and the media covers it regularly. So, who is Myles Garrett’s girlfriend?

Serra Tumay Has Her Own Independent Career

Garrett’s girlfriend is an accomplished young woman named Serra Tumay. Even though the media and fans have tried hard to find out more about her, Tumay has always tried to keep a low profile and go about her busy career. Tumay is a “performance dietitian” by profession and works with athletes of Olympic Games standards.

The Myles Garrett-Serra Tumay relationship has been talked about for a while now, especially since early 2020, when they started uploading pictures of themselves together on their social media accounts.

Since then, she has worked at UCLA Athletics as a performance dietitian where she uses a “food first” approach to nutrition to optimize athletes’ health and performance. Considering how competitive athletics can be at all levels, especially college, Tumay’s contribution is vital for athletes to perform better consistently.

Serra Tumay is very close to her family and derives great strength from them. Her family comprises of her mother, Berrin Eryesil Tumay; father, Tumar Tumay; and sisters, Sim Tumay and Selen Tumay.

Serra’s mother Berrin is of Turkish origin and studied at ITU Makina Fakültesi in Istanbul, Turkey, before relocating to America where she raised her three daughters. Berrin currently lives in Boca Raton, Florida, and is very fond of and close to her daughters.

Serra tries to spend as much time as possible with her mother and siblings when she gets time off from her career and personal life with boyfriend Myles Garrett.

Serra Tumay has tried to keep close links with her mother’s homeland of Turkey over the years, and in 2018, she vacationed there along with some of her close friends. However, most of the time, she is glued to her work, which has picked up a bigger profile since she launched her outlet, Tohum Nutrition.

Tumay, an athlete herself who grew up playing soccer, was introduced to nutrition education during her time with the Turkish women’s national soccer team.

Through her organization, Tumay educates people about nutrition, creates dietary plans for them, organizes camps where she speaks about nutrition and its importance, and does consulting work as well. She has also created the Tohum Wellness Club for people to join and learn and practice nutrition as much as possible.

Garrett is the bigger name in the Myles Garrett-Serra Tumay relationship, but Tumay is undoubtably a source of strength in it. Tumay is an intelligent and ambitious woman who uses her cross-cultural knowledge to better understand life and its complexities and deals with it accordingly.

If Garrett is highly successful in his football career, perhaps it’s in part due to Tumay’s athletic and nutritional wisdom and caring nature. While Garrett is always in the limelight for his exploits on the football field, Tumay is quietly working to develop the next generation of college athletes who will enthrall the world with their sporting prowess.