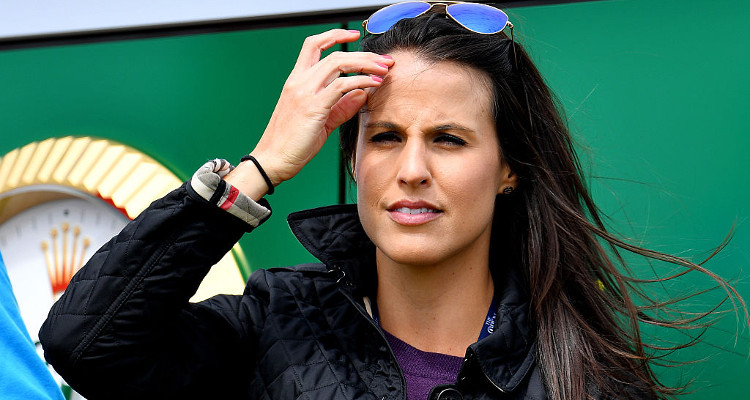 Sergio Garcia not only made a comeback to the Masters this year, he also won the Masters Tournament! The Spanish golfer will also be getting married this summer. Who is he engaged to? We have some facts about Sergio Garcia’s fiancée, Angela Akins.

Sergio Garcia won the Masters Tournament against Justin Rose on Sunday (April 9). While preparing for the Masters, Sergio was constantly supported by his loving fiancée. Angela Akins is no stranger to the world of golf and we have some interesting details about her, right here.

Angela is from Marble Falls, Texas, where she was raised with her siblings, Tara and Grady. The 31-year-old has a Bachelor’s degree in journalism from the University of Texas. While in college, she was a part of the Longhorn’s Women’s Golf team. Angela’s cousin is New Orleans Saints’ quarterback, Drew Brees.

According to her Longhorns profile, Angela was the team captain at Marble Falls High School and won 10 tournaments. Additionally, she ranked third in the 2003 regional competition and sixth in 2006.

In 2005, Angela was the Women’s Texas Golf Association Amateur Championship Two-Player Team Club Champion and has won a total of 17 medals in national tournaments.

During an interview with TexasSports.com, Angela said, “[My teammates and I] created some lasting memories when we were at Texas. We worked very hard every day practicing and staying in shape, but we were always having fun.”

So happy I got to spend some time with my two heroes this week. My Dad and Grandpa have always meant so much to me. At 91, Grandpa is probably busier than I am! They are both incredible men and I'm blessed to have them. #family #Texas

It seems like athletics run in the Akins family! Angela’s father is Marty Akins, an All-American quarterback for the Texas Longhorns. He played for Texas from 1972 to 1975. In 2002, Marty went into politics and ran as the Democratic Nominee for Texas Comptroller, which he ultimately did not win. As she began working for the Golf Channel, Angela told Vision Sports LLC in an interview, “When I first got my chance to interview at Fox Sports Southwest, I was asked if I knew anything about football and I just had to laugh. About the only sport I love more than golf is football, and Texas football is the best!”

Angela’s Career as a Journalist

We're cheering for you from Texas, @thesergiogarcia! Can't wait to see you next week! Love you! 😘

Angela went to Texas Christian University, before transferring to the University of Texas at Austin in 2006. She graduated in 2008 and interned at ESPN. After working for two years as a sideline reporter for Fox Sports Southwest, Angela started working at the Golf Channel in January 2015, which brought her to Florida. Angela credits her education and college for starting her career in journalism saying, “Our professors taught us how to be the best journalists, how to report objectively and with integrity and how to represent The University of Texas when we ventured into the world,” she said. “Without the support I received from my family, professors, coaches, the academic staffs in the athletics and communications departments and my teammates, I would not be where I am today.”

Sergio Garcia and Angela Akins started dating back in 2015. In an interview with Bunkered, Garcia was asked about how a calm personal life changes his game, to which he responded, “It definitely helps, every little thing that adds up is always good. When things are lined up nicely in your life outside of the game, your mind is calmer, you’re happier and those things are always good.”

On January 6, 2017, Sergio and Angela announced their engagement on Twitter saying, “Some very exciting news for us! We are getting married this year! Thrilled to see what the future bring us.” This will be Angela’s second time walking down the aisle, as she was married to former golfer, Ross Hamann, who is now a sales executive.