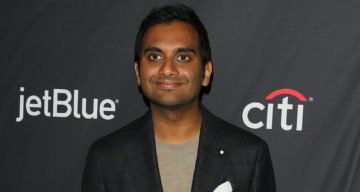 Aziz Ansari’s newest Netflix project, Aziz Ansari: Right Now, premiered on July 9 and doesn’t fail to deliver laughs. One of the viewers cheering him on is his new girlfriend. After his relationship with Courtney McBroom ended in 2016, the Parks and Recreation star was seen with her off and on. However, since 2018, Ansari has been dating one impressive lady named Serena Skov Campbell. And they are rumored to be getting very serious. In light of his new stand-up special, it’s time to familiarize yourself with Aziz Ansari’s girlfriend in Serena Campbell’s wiki.

Serena Campbell Is from Denmark

Serena Skov Campbell was born on December 15, 1988 and hails from Denmark. Her mother, Kirsten Skov Campbell, is a business intelligence consultant in Denmark.

Campbell is fluent in Danish, with conversational skills in German and French. She graduated from Esbjerg Statsskole (state school) in Denmark in 2008.

She spent the next decade in the U.K. studying and working. As per her latest Instagram activity, Serena is now based in New York.

Campbell Is a Physicist

Campbell is incredibly accomplished in her academic work, starting from her time at Esbjerg where she studied chemistry, math, and physics. She graduated from the University of Manchester with a masters in physics in 2014 and acquired her PhD in plasmonics, the study of the interaction of metals with electromagnetic fields, from King’s College London in 2017.

Her majors included biotechnology and laser and optical engineering. While pursuing her master’s degree, Campbell worked as consular assistant at the Royal Danish Consulate in Manchester. While working on her doctorate at King’s College, she was also a teaching assistant for more than two years.

Since 2017, Campbell has been attached to Twinkle Space Mission’s ORBYTS initiative as a mentor. The U.K.-based space exploration organization looks into cost-effective space research and study.

Even with her busy academic life, Campbell is quite the jetsetter, having traveled to Phuket, Paris, Tokyo, Vietnam, India, Sri Lanka, and Cannes, just to name a few. She’s also skilled in computer programming and loves yoga, reading, and swimming.

Campbell and Ansari Were First Seen Together at the 2018 U.S. Open

After his breakup with Courtney McBroom in 2016, there were rumors that Ansari and his ex were rekindling their romance. But in 2018, those rumors were laid to rest when the comedian was seen at a U.S. Open tennis match in September, cozying up to an alleged new girlfriend.

The woman was identified as Serena Campbell, with further confirmation to the media from her mother. Kirsten, however, stopped short of confirming whether the two were dating.

Not long after that, they were seen in public together quite often and Ansari featured in her Instagram posts, too.  In her 30th birthday post, she mentioned attending a ballet performance at the London Coliseum with “my love.”

And rumor has it that they are getting pretty serious. She traveled to India before celebrating her birthday last year. Ansari reportedly said during one of his shows that he and Campbell had traveled together to India, where he introduced her to his grandmother.