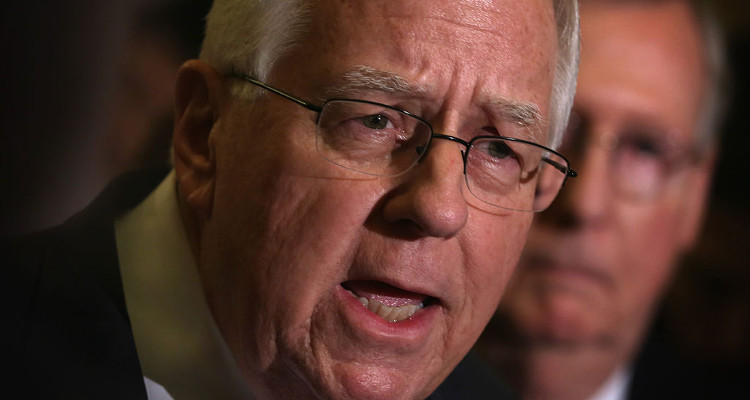 Mike Enzi, the Senator of Wyoming, took to the Senate floor before the GOP health care bill went to vote late Thursday (July 27) night. During his time on the floor, he refused to allow any interruptions.

In a blow to the Trump Administration, the GOP health care bill was voted against by the U.S. Senate. The deciding vote came from three Republicans senators: Susan Collins, Lisa Murkowski and John McCain, who was recently diagnosed with brain cancer. The GOP health care bill failed, despite Senator Mike Enzi’s efforts at burning the clock before it went to vote. His hour on the Senate floor was one of the crucial moments of the late night debate. Find out about it and more in our Mike Enzi wiki.

Michael Bradly “Mike” Enzi was born in February 1944, which makes him 73 years old. Through his parents, Dorothy and Elmer Enzi, he has German and Irish ancestry. His father served in the U.S. Navy shipyards on the Pacific Coast during World War II. Though born in Washington D.C., his parents raised him in Wyoming after his father completed his military service.

Enzi returned to D.C. to attend George Washington University and graduated with a degree in accounting. He also received his MBA in retail marketing from University of Denver, Colorado. He followed his father’s footsteps and served in the Wyoming Air National Guard.

He later moved to Gillette, Wyoming to expand NZ shoes, his father’s shoe-sale business. Enzi went on to open NZ shoes at more locations. As a business owner, he also had a stint as president of the Wyoming chapter of the U.S. Junior Chamber.

Enzi’s political career began at the age of 30, when he was elected as the Mayor of Gillette for two terms. The Republican was also elected to the Wyoming House of Representatives and Wyoming Senate. He was an outspoken opponent of legal gambling in the state.

In a tough primary race, he was elected to the U.S. Senate in 1996, the first accountant in the Senate at the time. As of 2017, he held the office four times. Despite his long political career, his net worth hasn’t been calculated.

During his tenure, he was best known for his stand on the energy industry; he is a strong proponent of the coal industry. A Center for Responsive Politics report revealed that he received over $270,000 from the oil and gas industry since 2012.

During his time in the Air National Guard, Enzi married Diana Buckley and they moved to Gillette. The couple has two daughters, Amy and Emily, and a son, Brad. Diana graduated from the University of Wyoming with a degree in adult education. She has been a strong supporter of her husband’s career, participating in Senate Spouses and other organizations.

Diana volunteers for the Marshall Legacy Institute to help regions infested with landmines. With the fighting spirit to rescue children in landmine zones, she also battled colon cancer over 10 years ago. After surgery and treatment, Diana Enzi beat cancer.

Most of Enzi’s career, as with anyone in politics, has not been without controversy. He has contentious stands on health care, environment, immigration, and other issues. Though he is one of the Republicans who advocate pro-LGBTQ reforms, he once came under fire for a thoughtless “tutu” statement.

He is one of the many senators who support President Trump’s policies, including the U.S.-Mexico wall, the Paris Accord, and health care. He was one of the senators who drafted the American Health Care Act before it would be voted on in the Senate.

Late Thursday night, while most of America slept, the Senate was close to voting on repealing the Affordable Health Care. The debate went on and tensions were high with protesters against the repeal of Obamacare. Enzi’s turn on the Senate floor came less than an hour before it went to vote. With the clock running down, Enzi spoke without entertaining questions from his opponents.

Democratic senators interrupted him a few times to ask if he would entertain their questions, to which he flat out refused. After he told Sen. Heidi Heitkamp “I will not yield for a question,” the Democrats in the chamber booed. When Sen. Patty Murray wanted to ask a question, Sen. Enzi responded with “Perhaps your time would be better spent looking at the bill.”

According to reports, the Republican senators were delaying the vote, much to the frustration of Democratic senators. John McCain, who was recently diagnosed with brain cancer, arrived for the vote. He voted against the repeal of Obamacare. With 48 Democrats and three Republicans voting against the “skinny repeal,” the GOP health care bill failed to pass.