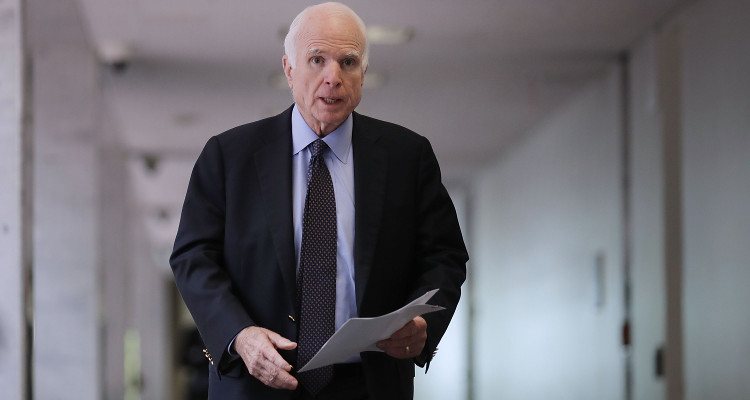 Senator John McCain, one of the biggest stalwarts of the Republican Party, has been diagnosed with brain cancer. The octogenarian’s office broke the news and revealed that he’s currently seeking treatment.

Senator John McCain is a fighter. From his glory days in the military to his long political run, including two bids for the Oval Office, McCain withstood it all and is still going strong. So when his office revealed that the Arizona senator has brain cancer, he received nothing but support and words of encouragement from the many people who know he’s strong enough to fight it. John McCain is currently seeking treatment after his diagnosis. Here’s an update on his health and more in John McCain’s wiki.

Path to A Naval Career

The second child of the naval officer, John S. McCain Jr. and Roberta McCain, John McCain III was born in the Panama Canal Zone when it was under the U.S. control. His father and grandfather were also a part of the U.S. naval forces, so he lived in various naval stations throughout his childhood.

In school, he excelled in wrestling and lightweight boxing. At the U.S. Naval Academy in Annapolis, he struggled with subjects like math, but did well in literature and history and showed leadership skills. However, he did not always follow the rules, because of which he got a low rank in spite of the capacity he had.

He was commissioned to the rank of ensign and began training to become a naval aviator, which he completed in 1960. But as a naval pilot, he was not considered at par and had the reputation of a careless, partying person. When he improved, he began his combat duty at 30, and had many near-death experiences. He was also a prisoner of war during the Vietnam War which made him a celebrity of sorts upon his return to the U.S. After more than two decades in the Navy, he retired in 1981.

After his return to the U.S., McCain served as the Navy liaison officer to the Senate. Once retired, he set his sights on Congress. In 1982, he ran as a Republican candidate for Arizona’s 1st Congressional District. He won the election, despite some contention, and became the newest member of the U.S. House of Representatives.

In 1987, he succeeded Barry Goldwater as senator and has since held office four times. He served in different committees and gained national visibility, even being considered as a potential running mate for George H. W. Bush. He also gained a reputation for challenging the party authority.

With a strong presence in the Senate, his next goal was the Oval Office. He ran for the Republican nomination but lost to George W. Bush. After Bush’s re-election in 2004, he ran for and won the Republican nomination in 2008. However, he and running mate, Sarah Palin, were defeated by Democratic candidate Barack Obama and his running mate, Joe Biden.

John McCain is a father to seven children: Daughters Meghan, Sidney, and Bridget; and sons John McCain IV, Andrew, James, and Douglas. Both Douglas (57) and Andrew (55) are the sons of McCain’s first wife, a model named Carol Shepp. He adopted the boys and had a daughter, Sidney, with Shepp.

During his initial days in politics, he was known for many extramarital affairs. However, he later married Cindy Hensley, the daughter of a wealthy beer distributor who helped him build political and wealthy connections that helped his election campaign. They have three children, Meghan, John, and James. We know Meghan McCain from her many appearances in the media. Cindy and John adopted their youngest child, Bridget, from Bangladesh.

What Happened to John McCain?

The 80-year-old senator has been diagnosed with a type of aggressive and malignant brain tumor, primary glioblastoma, the same condition Ted Kennedy had. The doctors treating McCain at Mayo Clinic released a statement to the media about his condition. The statement said that it was discovered around the time he was re-elected for his  sixth term in November and recently underwent surgery to remove a blood clot.

Because of his cancer history, John McCain often undergoes routine physical exams. It was one such exam where he told the doctor about his constant fatigue and foggy vision. After a CT and MRI, McCain was taken in for surgery. Post-surgery, the senator was as sharp as ever and recovering well. Additional therapy can only begin once the incision heals.