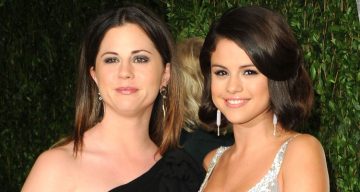 Selena Gomez’s mother has always supported her daughter and made sure that she stays on the right track. Mandy Teefey is an incredibly strong woman who has watched her little girl transform into a successful young lady, but according to reports, she has a real problem with her daughter getting back with Justin Bieber. Who is the mother behind the worldwide starlet?Read all about Mandy Teefey and Selena Gomez’s relationship, right here in our Mandy Teefey wiki.

Reports say Gomez’s family thinks that Bieber is toxic for the young star. And, it’s alleged that Mandy Teefey was hospitalized because of an argument she had with her daughter over her relationship with the “Baby” singer.

Learn more about it, right here.

She Was a Teen Mom

Born as Amanda Dawn Cornett on April 16, 1976, Mandy Teefey’s age is 41. She was adopted by her parents Debbie Jean and David Michael Cornett. She hails from Texas and was also raised there.

Since she was little, Teefey wanted to become an actress, so she began taking on roles as a kid. She started doing theater by the time she was a teenager. But when Teefey turned 16, she became pregnant with Selena Gomez by her then-boyfriend, Ricardo Joel Gomez.

Mandy Teefey separated from her partner when Selena Gomez was five. Troubles began brewing financially at home, and living conditions had become worse. And Gomez remembers how they mostly ate macaroni and cheese for their meals because Teefey did not like to ask money from her parents.

“She was very strong and very courageous. She was only 16 years old and that was a huge responsibility. My mother dropped everything for me; she had three different jobs, she supported me and she sacrificed her life for me,” Gomez said about her mom.

Both mom and daughter are great with babies. There are so alike no one can even distinguish. @selenagomez #MandyTeefey Love you both.

Supposedly, Not a “Belieber”

Selena Gomez and Justin Bieber have been on-again-off-again for a long time now, but their current relationship seems to be going strong. Gomez’s family was reportedly always against Bieber because they believe she deserves a man who treats her right.

Teefey also reportedly feels the same, and when news broke out that her daughter and Bieber were going strong, reports say she somewhat “flipped.” She was taken to a hospital for a welfare check-up.

The shock that Gomez was back to dating her ex was apparently too much for her to handle. Reports say after a very heated discussion about Bieber with her daughter, Teefey needed some medical attention.

However, according to People, Teefey was voluntarily checked out by medical personnel last week, and dismissed reports from TMZ that it had anything to do with The Biebs.

“It’s been a stressful time for Mandy and she made the decision herself to go to the hospital and make sure everything was okay,” a source told People. “This wasn’t just about Justin.”

Reportedly, Teefey was very happy when Gomez was with beau The Weeknd and has not been too keen on the news of Selena and Justin’s rekindled romance.

According to a source close to Gomez, “It’s true her family doesn’t approve of Justin, but this wasn’t just over a fight about him.”

Mandy Teefey got her chance at having a family again when she married her friend, Brian Teefey in 2006. She even has another daughter named Gracie Elliot Teefey who was born in 2013, after she suffered a miscarriage in 2011.

Selena Gomez was very happy for her mother and was supportive in every way. Later, Teefey revealed that her unborn daughter’s name was going to be Scarlett.

Selena Gomez has probably gone against her family’s wishes by dating Justin Bieber. And although Mandy Teefey blocked her daughter on Instagram, she can’t block Gomez from her life forever.

No one knows how long Selena Gomez and Justin Bieber’s relationship will last. But as of today, there is a strong feeling among fans that “Jelena” is here to stay!