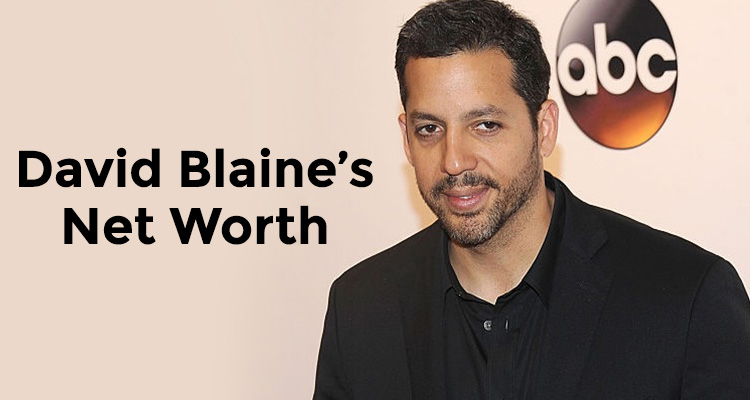 David Blaine is amazingly talented, even with a few simple card tricks as he exhibited his magic skills on The Tonight Show Starring Jimmy Fallon. Watch below as he stuns Fallon’s audience with his magic.

We can always do with some magic in the world! David Blaine hit up The Tonight Show to awe host Jimmy Fallon, the Roots, and the show’s audience, and of course, to freak them out a little. The magician was on the show for his upcoming episode of David Blaine: Beyond Magic. Since he’s one of the most successful modern-day magicians, we can’t help but wonder: how much is David Blaine worth? For that reason, we’ve found out David Blaine’s net worth and are sharing it with you!

He’s One the Highest-Earning Magicians in the World!

Blaine has a net worth of approximately $12.0 million.

He’s most well-known for his death-defying endurance stunts, like being buried alive and encased in ice. His Houdini-style performances are the reason he’s one of the most sought-after magicians today.

However, even with all of his high-paying gigs, Blaine did not make it onto the Forbes World’s Highest Paid Magicians list, despite being qualified for it. The reason behind this is because Blaine took a break from his public and private performances in order to prepare his new show, David Blaine: Beyond Magic. His manager, Guy Oseary says that Blaine has often turned down shows adding that, “David’s very picky on who he associates with. David makes his decisions based on art, not commerce.”

Blaine still earns a lot of money from his TV show and public performances, and is also planning his first worldwide tour next year. With his future projects lined up, he’s sure to make it on Forbes’ list soon.

The magician extraordinaire performs unbelievable endurance tests and illusions, like standing on top of a 90-foot pillar, spending more than a month in a box suspended over the Thames, holding his breath underwater for 17 minutes, and even electrocuting himself! But it’s not just cheating death that makes Blaine a modern-day Houdini —it’s his publicity.

The great illusionist, Harry Houdini was known to ensure press coverage before he performed any stunt. Blaine rose to prominence the same way, by performing a stunt and gathering media attention beforehand.

Sometimes his tricks gained large-scale media attention. The 43-year-old’s endurance stunt called “Above the Below,” in which he was suspended 30 feet above the river Thames in London in a glass box, got media coverage both in the United States and the United Kingdom. Blaine survived only on water for 44 days. The President at the time, George W. Bush, referred to Blaine’s stunt in a speech saying, “The last noted American to visit London stayed in a glass box dangling over the Thames. A few might have been happy to provide similar arrangements for me.”

He Showed an Interest in Magic at 4 Years Old

David Blaine White was born and raised in Brooklyn, New York. His father, William Perez was a Vietnam war veteran. His mother, Patrice Maureen White was a school teacher who had raised him alone for a while before she remarried John Bukalo when Blaine was 10, and the family moved to New Jersey.

When Blaine was four years old, he saw a street magician perform on the subway. That one show was enough to trigger a lifelong interest in magic for Blaine. When he was 17, he moved to Manhattan where he performed private events for celebrities like Mike Tyson and Al Pacino.

Blaine sent a tape of his performance to ABC and the response he got was tremendous. The illusionist then went from performing for famous people to becoming one himself.

Blaine has a five-year-old daughter named Dessa Blaine, with his ex-fiancée and French model, Alizee Guinochet. At the time that Guinochet went into labor, New York City was crippled by a massive blizzard, and Blaine couldn’t hail a cab or car service as the roads were buried under 19 inches of snow!

So, what did Blaine do? He flagged down a snow-plow to take the expecting parents from their Manhattan home to a hospital. Guinochet delivered a healthy baby girl on January 26 2011.

Blaine’s ABC special, David Blaine: Beyond Magic took him two years to make and will mark his return to primetime television on November 15. Tune into ABC at 10:00 p.m. EST to be dazed and amazed by Blaine, as he shows us what exactly a human aquarium is!