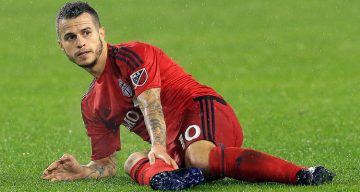 If you are a soccer fan, then you must be familiar with Canadian Club Toronto FC player and Italian national team player, Sebastian Giovinco. Here is everything you need to know about him in our Sebastian Giovinco wiki, including information on his stas, career, family, and net worth.

Sebastian Giovinco was born on January 26, 1987, in Turin, Italy. His father Giovanni Giovinco is of Sicilian heritage and his mother, Elvira Giovinco, is Calabrian. Although he was born in Turin, he grew up in Beinasco, which is a commune located southwest of the city. In 1996, when he was nine, Giovinco joined the Juventus Youth System.

Sebastian Giovinco was nicknamed “Formica Atomica,” which translates to “atom ant.” He is named after the Hanna-Barbera’s character because of his short height and agility. How tall is Sebastian Giovinco? The Canadian club Toronto FC player is 5’4″ which makes him shorter than most players, but even more impressive!

Sebastian Giovinco’s Net Worth is an Estimated $22.8 Million

Giovinco signed a three-year contract with Juventus FC worth approximate $23.7 million, and his market value is estimated to be $11.4 million. Here is a break down of Sebastian Giovinco’s earnings:

Giovinco and his partner Shari welcomed their first child, Jacopo Giovinco in May 2013. Sebastian Giovinco’s younger brother, Giuseppe Giovinco, also joined the Juventus Youth System, and now he is a part of Legal Pro.

Sebastian Giovinco impressed everybody in the club during the 2005-2006 season, after winning the Campionato Primavera, Coppa Italia, Supercoppa Primavera, and made it to the finals at the Viareggio Tournament. He was named the best player of the match.

In the years 2005 and 2006, Giovinco was a part of the Juventus Club’s Campionato Primavera winning team. He made his debut for Juventus while the club was in Serie B and played against Bologna, where he topped the game with an assist during the 3-1 win for Juventus.

In July 2007, Giovinco was sent on loan to the Italian Empoli F.C. (Empoli). With Empoli, he scored his first goal in Serie A on September 30, 2007, in a 3-1 victory over Palermo. At the end of the season, Empoli was moved down to a lower position and Giovinco returned to Juventus, where he stayed for two more seasons.

Sebastian Giovinco scored his first goal for Juventus on December 7, 2008, and in August 2010, he was sent back on loan to the Italian Parma F.C. (Parma). Parma held the condition to buy 50% of Giovinco’s contract at the end of the loan agreement. Giovinco’s impressive skills for Parma earned him his first call to the Italian national team.

After his first season at Parma, the club agreed to purchase half of Giovinco’s contract, and he remained with Parma for the 2011-12 season. That season saw Giovinco finish as the club’s leader in goals (15) and assists (11) in Serie A. In two seasons at Parma, Giovinco made a combined 70 appearances, scoring 23 goals, and added 22 assists.

To date, Sebastian Giovinco has earned 21 caps and has scored one goal for the Italian national team. On February 9, 2011, during the friendly match against Germany, Giovinco won his first cap for Italy. He was also a part of Italy’s second place finish at the UEFA Euro 2012 tournament. He earned his first international goal against Japan in the 2013 FIFA Confederations Cup, where Italy went on to win the Bronze medal.

Giovinco has represented his birth country at every step since U-16. In 2008, at the Toulon Tournament, Sebastian Giovinco was named Player of the Tournament. He went on to represent Italy at the 2008 Summer Olympics in Beijing, China and also at the 2009 U-21 European Championship.