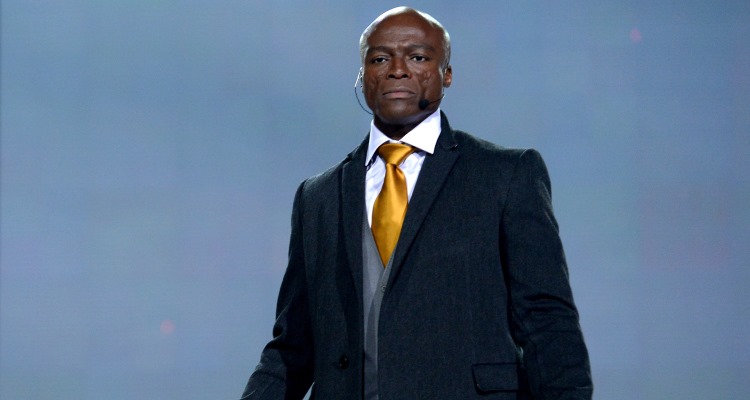 Who is Seal? While many may not know who the singer is, we are here to answer that very question, since the singer will be on America’s Got Talent tonight! If you’re a fan of the show and want to know more about Seal, then we’ve got the details on his life and career, right here. Seal’s net worth, estimated at $30.0 million, will also be discussed, so keep reading!

Seal, 54, was born as Sealhenry Olusegun Olumide Adeola Samuel on February 19, 1963 in London, England and is of Nigerian descent. Before he was raised by his stepparents, he was brought up in foster care for much of his young life and was angry and abusive. Seal earned an architecture degree and worked several jobs before he finally turned to a successful career in music.

What are Seal’s Scars From?

While Seal’s songs made him famous in the early ’90s, the Grammy winner is also recognized for his facial scars. While many thought they were burn marks, they’re actually a form of lupus. When he was 23, he contracted the condition called discoid lupus erythematosus—which occurs when the immune cells attack the body tissue and inflammation takes place in the skin at an intense level. The condition has been in remission for years, but the scars are permanent. He was once depressed over the scars, but has since embraced them.

Are Seal and Heidi Still Married?

Seal’s wife was Heidi Klum, age 44, but for those who don’t know, Seal and Klum are no longer together and have been divorced for years now. The “Kiss From a Rose” singer married the supermodel on a beach in Costa Careyes, Mexico in May, 2005. In December 2004, Seal proposed to Klum “with a yellow diamond ring of more than 10 carats in a specially-built igloo on a 14,000-ft.-high glacier in Whistler, B.C. Klum described it as ‘a once-in-a-lifetime event,'” according to People. Sadly, the couple divorced in 2012 and Klum cited, irreconcilable differences.

In an exclusive statement with People, Seal and Klum said: “While we have enjoyed seven very loving, loyal and happy years of marriage, after much soul-searching we have decided to separate.”

“We have had the deepest respect for one another throughout our relationship and continue to love each other very much, but we have grown apart. This is an amicable process and protecting the well-being of our children remains our top priority, especially during this time of transition.

“We thank our family, friends, and fans for their kind words of support. And for our children’s sake, we appreciate you respecting our privacy.”

Take a look at this breakdown of Seal’s record sales over the years.

How Rich is Seal?

Seal’s album, Seal, did well so in the ’90s that his net worth is estimated at $30.0 million! His album, Soul 2, debuted shortly after his split from Klum, which at the time could’ve translated to more ales, according to Billboard editor Bill Werde.

“Personal lives can affect an artist’s career,” said Werde to E! News. “In certain kinds of ways, this might only be good for the release of his album. There are certain platforms in this celebrity-driven world where booking an appearance for Seal becomes more interesting now because there’s a celebrity divorce to discuss and not just a new Seal album.”

But his albums, Soul (2008), Hits (2009) and Commitment (2010), were not well received in terms of record sales. But luckily for him, Seal’s house wasn’t repossessed and whether it’s Seal’s tours or TV roles, the singer is never far from the spotlight.

Seal will be joining his ex-wife on a new episode of America’s Got Talent tonight as a guest judge. Co-host Howie Mandel already pointed out that the young dancing contestants, Artyon and Paige, already look like miniature versions of Seal and Klum!

Catch Seal on America‘s Got Talent tonight, on Tuesday August 8 at 8:00 p.m. EST on NBC!

I join the @agt judging panel this week and they let me take control of the Golden Buzzer. Tune into NBC tomorrow evening #AmericasGotTalent