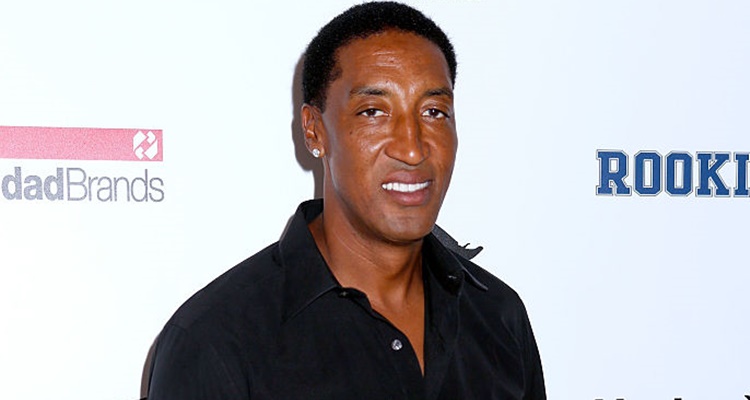 Scottie Pippen announced last week he and his wife, Larsa Pippen, are splitting up after 19 years of marriage. Their ugly divorce has thrust the former NBA star in the limelight. Here are some facts you need to know about Scottie Pippen.

Scottie Pippen is divorcing his wife of 19 years, Real Housewives of Miami star, Larsa Pippen. Their divorce took an ugly turn when the former NBA Chicago Bulls small forward appealed for full custody of their four children, and refused to pay her any alimony, as reported by Radar Online. Now, everyone is wondering “who is Scottie Pippen?” and what reasons does he have to not pay for child support? Here’s Scottie Pippen’s wiki, including facts about his wife, divorce, rings, kids, and net worth.

1) His Net Worth Decreased due to Failed Investments

Scottie’s net worth is estimated to be around $50.0 million.

That figure is as big as his six feet eight inches height, but it’s still considered less for someone who played for the Chicago Bulls.

While in the NBA, Pippen had a net worth of $110.0million. He had major endorsement deals with big companies like Nike, McDonalds, and Coca-Cola. He was among the highest paid NBA players alongside Michael Jordan and Magic Johnson. He had such an illustrious career that he is one of four players who owns six championship rings for the games he played between 1990 and 1998.

SCOTTIE PIPPEN HAS MORE RINGS THAN HIM!!! pic.twitter.com/JpmppxQtvQ

So what happened for Pippen’s net worth to decreased by over half? The answer is failed investments. After he retired in 2005, Pippen sought to invest his money, and hired a financial firm recommended by his team. Soon, Pippen learned his financial adviser, Robert Lunn, was being investigated for fraud. Pippen had invested $20.0 million through Lunn, and found out too late that his money was used to pay off Lunn’s personal debts. Lunn was imprisoned for fraud, and forging Pippen’s signature for a loan.

The bad investments, and lawsuit, cost Pippen heavily and his net worth declined.

2) He has been Married Twice and has 8 Children

The 51-year-old has a son, Antron Pippen, with his first wife, Karen McCollum. They divorced in 1990 after three years of marriage. He also has a daughter, Sierra Pippen, with her former fiancée Yvette De Leon, and another daughter, Taylor Pippen, with his former girlfriend Sonya Roby. Pippen has been in and out of court in the ‘90s when his exes filed paternity lawsuits against him.

Scottie Pippen has has four children with Larsa Younan Pippen; Sophia Pippen, Justin Pippen, Preston Pippen, and Scottie Pippen Jr. The couple had married in 1997, and after 19 years of marriage, he filed for divorce last week. Now, Pippen has appealed to the court for full custody of their children, and not be forced to pay alimony to Younan.

3) Is the Divorce a Result of Infidelity?

The exact reason behind the couple’s sudden divorce is unclear, but rumors began to float around saying that Younan was having an affair with rapper Future. Other speculations include the two recent domestic disturbance calls that had the police at the Pippens’ doorstep. However, the Twitterati has gone into a spin talking about Younan cheating on Pippen. The Real Housewifes of Miami star reportedly traveled with the hip-hop artist around the country on his private jet. They were also spotted getting close in a Miami nightclub.

Sources close to Younan said that the reality star was cheating on her husband ever since he was spotted getting close to another woman last year. So is this payback? No one knows. The real reason for the divorce has taken a backseat since Pippen has refused to pay his wife alimony, and is demanding full custody of their children which could deny Younan any child support and leave her penniless.

According to Radar Online, Pippen has not only requested full custody of their children but he also petitioned for relocating them to Chicago. If full custody is not possible, Pippen requested for the majority of the time-sharing.

4) Pippen is a Famously Lousy Tipper

Pippen is infamous for leaving relatively poor tips for serving staff whenever he visits a restaurant. A 1997 Sports Illustrated issue named him one of the three biggest “skinflints” in the NBA. The other two he shares the title with? Minnesota Timberwolves’ Kevin Garnett, and Orlando Magic’s Shawn Kemp. Restaurant staff reportedly nicknamed the retired NBA player “No Tippin’ Pippen.”