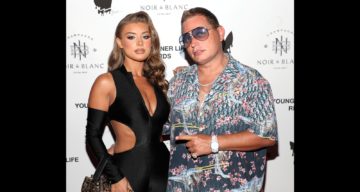 Scott Storch may be off the market! The hitmaker posted a picture with his alleged girlfriend on July 7, and his Instagram followers went wild. He hasn’t explicitly confirmed their relationship, but it has prompted reactions from social media users. Some not so positive. Many, however, want to know who Scott Stoch’s girlfriend is. The woman in the picture has been identified as Avalon Dawn, a model, social media influencer, and entrepreneur. She started building her impressive resume as a teen and is becoming a self-made entrepreneur. Find out about Avalon Dawn and her relationship with Scott Storch here.

Avalon Dawn Becklund was born on September 24, 1997, and hails from Florida. She states in her Instagram bio that she is of Sicilian descent.

She is one of two kids born to Shawn Becklund. Avalon’s mother Shawn is a former dancer and model and is currently a fitness trainer. While Avalon and her brother, Aidan Becklund, were teens, Shawn fought and survived breast cancer.

Avalon’s brother Aidan is a collegiate boxer at the University of Notre Dame. He is set to graduate with a business degree in 2022.

While supporting their mother through her cancer battle, Avalon and Aidan maintained their honor student statuses at East Lake High School. After graduating from high school, Avalon Becklund attended the University of Florida.

While studying business administration with a marketing concentration at the Warrington College of Business, she was actively gaining experience as a social media analyst with Agora. She was also a mentee at Retail You, had multiple internships, and did part-time jobs.

She earned her BS degree in 2020. By then, Becklund had begun her entrepreneurial career as the founder and CEO of a fashion business.

She balanced all this with a modeling career that began in 2011, when she was 13. Not only is she following her mother’s footsteps and accomplishing what her mother couldn’t do, but modeling put her through college and she graduated debt-free.

In 2017, she appeared in J Alvarez’s music video for “Esa Boquita.” She was called for the shoot while she was smack in the middle of finals. J Alvarez’s team flew her from Gainesville to Miami and back, she studied between breaks and makeup, and she got back to Gainesville in time to ace her exams.

Scott Storch posted a picture on his official Instagram page on July 7. The woman in the photograph was identified as Avalon Dawn—as she goes by professionally—and it seemed like they were making their relationship Instagram official.

The comments section was full of mixed reactions. The record producer responded to compliments for his alleged girlfriend’s beauty, and even Avalon left a comment.

However, there were some unsavory comments as well. Many accusing Avalon of being a gold digger and some giving Storch unsolicited ill advice. The comments may have provoked Storch to disable them on his page.