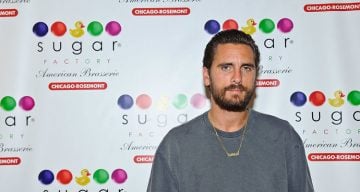 Scott Disick thought he was clever, but the Kardashians caught him with his pants down. Not literally, but they found out that he brought a girl named Chelsea along with him for a family vacation in Costa Rica. Doesn’t this scene sound familiar?

Scott Disick seems totally incapable of not shooting himself in the foot. He’s been with the Kardashian Klan for long enough that he should realize what he can and can’t do. It wasn’t long ago that he was busted for a similar situation in Dubai. Who did Scott bring to Costa Rica? Apparently, its’ some girl named Chelsea! Is Scott Disick dating Chelsea? We will tell you all we know about Scott Disick’s possible girlfriend, Chelsea.

Keeping Her Under Cover

It appears that Disick brought a girl named Chelsea on a vacation with Kardashian family in Costa Rica. When he joined the rest of the Klan for dinner, the Kardashians dropped a few Chelsea’s into the conversation, letting Disick know he’s been made.

Kim says, “Did you guys hear what Chelsea said?” to which Khloe replies, “…she’s such a b***h.” They go back and forth about Chelsea until Kim reveals that she was talking about Chelsea Clinton sticking up for Barron Trump. After Khloe emphasized that she thought Kim meant Chelsea Handler, Kourtney gives Disick a smirk and he realizes that he was caught as a group of fire dancers perform behind him.

All of this is shown in the preview for last night’s (May 7) episode of Keeping up with the Kardashians before the screen cuts to Scott Disick saying, “It’s pretty obvious that the girls know that something’s up. Nobody really wants to say what’s on their mind and if this dinner isn’t awkward enough, these fire dancers have to come out and start doing hula hoops. I already felt like under fire.” But then again, he did allegedly fly a girl to Costa Rica on what was supposed to be a family vacation with the three children he co-parents with Kourtney.

There have been rumors of Lord Disick having a new girlfriend. Scott Disick’s girlfriend in 2017 is said to be British model Ella Ross, with whom he was spotted in Los Angeles recently. Disick, who is 33 years old, was seen with the 19-year-old model at Nobu restaurant on Friday (May 5). Later that night, they were seen going for dinner at TAO Asian Bistro.

What’s Bad Boy Disick up To?

So, what happened to Scott Disick? Wasn’t he going to clean up his act and get Kourtney back for good? Why would he bring a girl to Costa Rica? If that’s not bad enough, what is he doing hanging out with Ella Ross in LA? At this point, there are more questions than answers! If he doesn’t mend his ways, there is no way he is going to win Kourtney back any time soon.