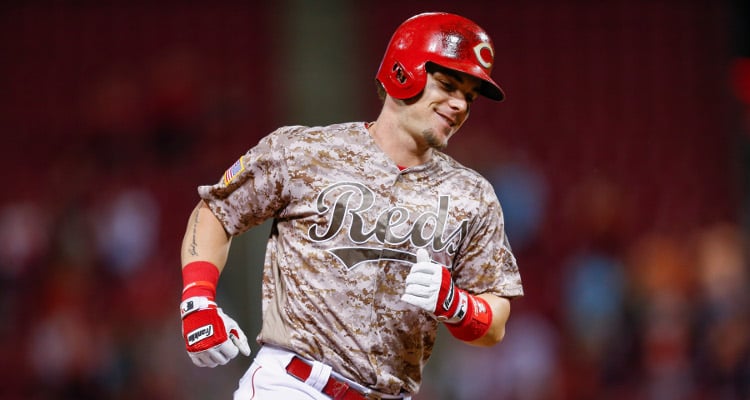 Scooter Gennett of the Cincinnati Reds is going to go down in MLB history. This underrated player hit four home runs in the game against the St. Louis Cardinals. He’s one of the few history-makers to hit four homers in a single game.

Before yesterday, Scooter Gennett was one of the most underrated players in the MLB. But when the Cincinnati Reds crushed the St. Louis Cardinals, Gennett had a record-setting contribution. The Reds’ second baseman became the 17th player in MLB history to hit four home runs in a game. The last time that happened was in 2012! Now, everyone’s asking about the player who came out of nowhere and made history. Here’s our Scooter Gennett wiki to get you up to speed.

Ryan Joseph Gennett was born in Cincinnati and adopted the nickname “Scooter,” as he was a big fan of the Muppets character. The name stuck, after his mother tried to teach him a lesson about putting his seat belt on.

His mother took him to a police station so he’d get a lecture on buckling up in the car. “I thought I was going to be arrested,” he said. “So, I told the policeman my name was Scooter. After we left there, I didn’t answer to Ryan because I thought if I answered to my real name I’d get arrested.”

Early Start in His Career

Scooter was picked by the Milwaukee Brewers in the 16th round of the 2009 MLB Draft, out of Sarasota High School in Florida. He represented the Brewers in the 2012 All-Stars Futures game. Less than a year later, he made his major league debut against the Oakland Athletics. He hit his first major league home run against Bronson Arroyo, in his hometown of Cincinnati.

In March this year, he was claimed off of waivers by the Reds and was now playing for his hometown. He had only hit three homers this season before playing against the Cardinals. Now that he has hit a career high of four home runs in a game, his stats improved tremendously. Analysts are shooting numbers of his new stats, one claiming he hit 9.5% of his career home runs.

His net worth hasn’t been calculated yet, but he made around $260,000 at the start of his career. It eventually increased to more than $500,000 and he now reportedly earns a salary of $2.5 million with the Reds. He has earned over $4.4 million in his career.

His Teammates Didn’t Know He Got Married

During the 2015 season, the Brewers returned after a day off and were surprised to learn there was a newlywed among them! Gennett got married to the love of his life, Kelsey, in a ceremony so private, not even his teammates knew about it!

Kelsey and Scooter were high school sweethearts, who have been together since their sophomore year. They got engaged during a Thanksgiving celebration and were planning a small ceremony.

“We were going to plan on it around December, but I have 30 first cousins and it would have been a huge wedding and a lot of stuff to worry about, and she didn’t want that,” Gennett said. “So we moved it up a little bit. Kept it under wraps. We’ve been planning it for 2-2 1/2 months now. It wasn’t a spur of the moment thing, but it seemed like that to some of the guys in here because I didn’t let them know.”

Less then 20 family and friends were in attendance and Gennett had made elaborate plans which don’t really sound as “small” as he made them out to be. “I was supposed to have a helicopter there but the weather was so bad they had to cancel,” Gennett said. “I was going to have a helicopter pick us up after everything was done and fly us around the city a couple times. It was going to be cool. I think they’re going to come by some other time and fly us around. That was the only thing that didn’t go according to plan.”

Happy anniversary to my beautiful wife Kelsey! Many more to come. Love you so much!!❤️❤️ pic.twitter.com/6nr85QIxS7

He Didn’t Want the No. 4 Jersey

When the 27-year-old joined the Reds, he didn’t expect to be given the No. 4 jersey. The number previously belonged to Brandon Phillips, who is now with the Atlanta Braves. Phillips is still a beloved player in Cincinnati and Gennett himself is a longtime fan. So, it was a bit awkward to wear the great player’s number at his stature.

“When I came over, I didn’t expect to get that number,” Gennett said. “It wasn’t something that I picked. But unfortunately, that was my only option, what I was told.” He said he tried to get the number changed, but found out that the process was difficult.

On the other hand, Phillips felt insulted his number was reissued by the Reds. “I still can’t believe somebody is wearing my No. 4,” Phillips told reporters. “That’s kind of a slap in the face, too. But it is what it is. People have their own opinions, and I have mine.” Well, we think Scooter Gennett did the No. 4 justice, after hitting the same number of home runs in one game!