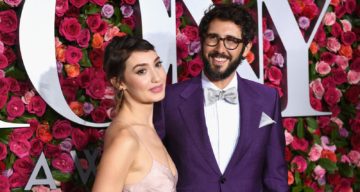 Josh Groban has dated his fair share of famous ladies, but his relationship timeline is currently paused (possibly for good) on Schuyler Helford. Josh Groban’s girlfriend is not really a musician like him, but she is a creative genius in her own right. Our Schuyler Helford wiki proves this is one talented woman to keep an eye on.

Schuyler Helford was born on March 10, 1991 and is 27 years old. She and her brother, Aven Helford, were raised in Los Angeles by their parents, Bruce Helford and Jan Corey Helford.

Bruce Helford is a familiar name among TV viewers. The acclaimed writer and producer is the man behind The Drew Carey Show, Kevin Can Wait, Anger Management, George Lopez, Family Ties, and Nikki, just to name a few.

He was one of the producers and showrunners behind ABC’s Roseanne revival, which got canceled amid fallout from Roseanne Barr’s racist tweets. Helford then created the Roseanne spinoff series, The Connors, which premiered in October 2018 without Barr.

Helford had taken a brief hiatus from producing hit sitcoms before returning with Charlie Sheen’s Anger Management in 2012. During his hiatus of a few years, Schuyler was college-bound and her brother would be in a few years, too. So Bruce decided to spend more time with Schuyler and Aven before they went to college.

“And then, when they both were at school, I realized, ‘Okay, the kids are out of the house, I’m going to be bored, unbelievably. I can’t just sit around. I’m going to need to develop something,’” said Bruce about creating the series with Charlie Sheen.

She Is a Writer and Actress

Schuyler, who had a recurring role in Anger Management, also followed her parent’s footsteps to become a remarkable writer and producer. Unlike father Bruce Helford, she’s also an actress and has worked in some of the series she’s produced.

She has focused her post-college career on creating and acting in comedy. She created two award-winning web series, #Cybriety and Indoorsy.

#Cybriety is about two technology-obsessed Millennials, Ally Ruddy and Schuyler, who swear off technology. Hilarity ensues as the girls try to lead Internet-free lives.

Indoorsy follows three agoraphobics who start a day spa in their apartment to try and expand their lives.

Shortly after his relationship with Dennings ended, he was reported to be dating actress-writer Schuyler Helford. They made their red carpet debut as a couple at the 72nd Tony Awards in June 2018, which Josh Groban was co-hosting.

They have attended several events together since then and have been spotted on dates as well. Groban and Helford are fairly private about their relationship and rarely appear in each other’s Instagram posts.

We went ice skating in Bryant Park and DIDN’T FALL ONCE unlike so many toddlers. Shout out to that massive tree and to the girl behind us who knew better than us where the lens was. 🌲⛸

The last time she featured on Groban’s Instagram was when they spent Christmas together in 2018. Unlike her #Cybriety character, Helford is not very active on social media. Groban was last seen among her occasional Instagram posts in July 2018. She does mention him on Twitter, though.