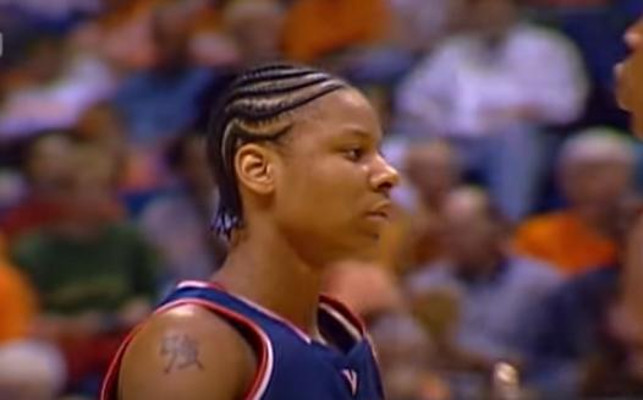 On Sunday, ESPN showed the painful life of former basketball player Schuye LaRue. Once a promising WNBA star, it was revealed that Schuye LaRue, in 2017, lives on the streets of D.C.

Schuye LaRue was at one point in time named “the most promising freshman of the country.” She was the 27th overall draft pick in 2003, and was named ACC Rookie of the Year. Find out more about her in our Schuye LaRue wiki right her.

Schye LaRue stands at 6’2”, and was considered the next best thing in women’s basketball. Her mother, Barbra, chose her daughter’s name after a friend of hers gave birth to a partially paralyzed child named Skye, but decided to change the spelling. She later said in an interview that the name worked out because her daughter is so tall.

LaRue lived with her mother and brother, Nathaniel, in D.C. Barbra worked as a retailer and only earned a small handful to provide for her children. Meanwhile, her daughter learned to play ball against men in pickup games. By the time she started at Archbishop Carroll High School, she was easily the tallest in her class, and was already starting on the varsity team in her sophomore year.

Her trainer at the time, Wallace Lee, worked at a different school and said she had “that God’s gift” —her talent could not be taught, and he was more than willing to help her hone her skills.

She was averaging 22 points per game, and Lee was stunned, “She was, like, the best thing I’d seen in the area.” USA Today named her the top player in the District in 1999.

Schuye LaRue went to the University of Virginia where led the team to multiple victories and trophies. She played in the NCAA tournament and, though she had a three-point shot moments before the buzzer, Virginia lost the game.

But that did not deter her spirit, nor did it make others lose sight of her talent. However, despite still having two years left and qualifying for the WNBA before she was 20, LaRue decided to play in Italy.

When she returned from Italy in 2002, the star basketball player was diagnosed with schizophrenia, with her mother revealing that the mental illness was the cause for her daughter’s sudden decision to play overseas.

LaRue’s life took another turn shortly after, when her brother was found shot to death in a car. She was close to Nathaniel, and her condition worsened after losing him. Barbra explained that LaRue began having “delusions—audio and visual. She’d be talking to people [who weren’t there], and it looked as though she was talking to [you], but she wasn’t.”

The WNBA draft was just round the corner, and though LaRue seemed like a changed woman, her trainer noticed that she had trouble focussing and”wasn’t in the right mind.”

But, even though she did not play in the States for two years, the Los Angeles Sparks drafted her. After a few attempts to put her on a flight, Lee had her leave for Los Angeles. Though she was physically part of the team, she was mentally elsewhere.

“I remember getting a phone call late, telling me to come get her,” LaRue’s friend, Amanda Brice said, “She came to practice and had a Britney Spears moment—half of her hair was shaved off.”

LaRue was suspended from the Sparks after she stopped practicing, and never got to play the WNBA.

By 2006, LaRue’s mother moved herself and her daughter closer to family in Anne Arundel County, where Schuye visited a psychiatrist three times a week. Barbra then had to move to Prince George’s County for her job at Macy’s, and LaRue’s health took a toll. She became dazed and ultimately found her way to Washington D.C. again. On the streets, she punched a woman in the face, and was charged with simple assault. She began breaking the law and missed all her court hearings. She was caught shoplifting, which was later dismissed, but failed to attend another hearing, resulting in a charge for violating her release, to which she pleaded guilty.

Where is Schuye LaRue Now?

After seven mental health evaluations, she was diagnosed with psychotic disorder and schizophrenia in 2014. By 2015, she was living on the streets, likely not receiving the proper care for her conditions.

It was that year when her friend, Chamique Holdsclaw saw a battered Schuye LaRue in torn and dirty clothes, asking her to buy a sandwich.  She immediately helped her friend, and told her story to The Washington Post.

LaRue’s story made it to many outlets across the nation, including Food for Fuel, a nonprofit organization that helps homeless athletes. They wanted to get her off the streets, but as she had many times before, Schuye LaRue refused the offer.

Caught the E:60 profile on Schuye LaRue from my desk this morning. I kept it together…sort of (?). If you have a moment, check her story out. It's all too familiar and tragic. #espn #wnba #e60 #tragic #mentalhealth #mentalhealthsupport #mentalhealthawareness #schuyelarue