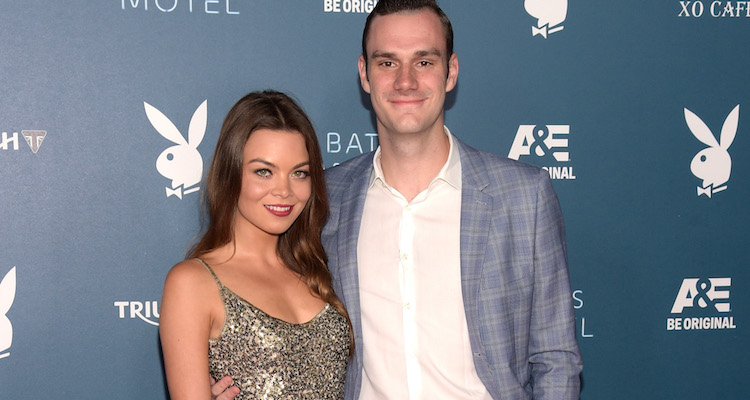 Another death has taken the entertainment world by surprise, after Playboy icon Hugh Hefner  passed away at 91 on Wednesday night. He died of natural causes at the Playboy Mansion and was surrounded by loved ones. Now, fans of the international ladies’ man are asking about Cooper Hefner‘s girlfriend. For more details, take a look at our Scarlett Byrne wiki.

Who Is Cooper Hefner’s Fiancée?

That’s right, she’s Cooper’s fiancée! Scarlett Byrne’s age is 26 and she was born on October 6, 1990 in London, England. If she looks familiar, it’s because she’s also an actress. Scarlett Byrne is Harry Potter‘s Pansy Parkinson from the hit book-turned-film franchise. Not only that, they are both huge Harry Potter fans, which gives them something in common. She has also been featured on the hit CW drama, The Vampire Diaries.

The pair got engaged in 2015 and posted the occasion on his Instagram account with the caption, “Too many more adventures with this lovely lady.” The couple have been inseparable ever since.

She Posed for Playboy Magazine

Most guys might be upset at the idea of their girlfriends or fiancées posing nude for their dad’s company, but not Cooper Hefner!

He told the New York Post: “You’re talking to somebody whose mom has been in the magazine. My interpretation of being comfortable with sex is different than most people’s. I really don’t think sex is weird until people make it weird.”

Her Fiancée Works at Playboy Enterprises

At just 26 years old, Cooper is chief creative officer of Playboy Enterprises, which he joined when he was 21 but left briefly in 2016.

“There was a business strategy presented to the board that taking nudity out of the magazine . . . would generate advertising,” Cooper told The Post. “I thought it was . . . a direct attack on what Dad has been fighting for his entire life — to normalize sexuality.”

He added: “I was not in favor . . . and there were moments where I questioned my own sanity while listening to people responsible for running a major company,” he added. “One of my first priorities was to reinstate the nudity . . . [so] that what Dad built was authentic.”

Cooper Spoke about His Father

When the news of his father’s death was announced, Cooper released a statement to honor his memory.

“My father lived an exceptional and impactful life as a media and cultural pioneer and a leading voice behind some of the most significant social and cultural movements of our time in advocating free speech, civil rights and sexual freedom,” he shared. “He defined a lifestyle and ethos that lie at the heart of the Playboy brand, one of the most recognizable and enduring in history.”

He added: “He will be greatly missed by many, including his wife Crystal, my sister Christie and my brothers David and Marston, and all of us at Playboy Enterprises.”

Happy Birthday to my Adventure partner @cooperbhefner ? I love you

If you’re looking for more of Scarlett Byrne’s pics, then head over to her Instagram page. She has 164k followers and plenty of photos of herself with Cooper. Fans regularly message her and comment on all of her envious pics.

Our thoughts and prayers go out to the Hefner family during this difficult time.