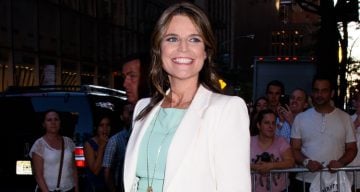 She was born as Savannah Clark Guthrie on December 27, 1971 in Melbourne, Australia. Savannah Guthrie’s age is 44. During her birth, Savannah’s father was posted in Australia but later on, her family moved to Tucson, Arizona for two years. Savannah graduated from Amphitheater High School in Tucson. She has completed her undergraduate degree in Journalism from the University of Arizona. She was also a part of the Arizona Alpha chapter of Pi Beta Phi.

Savannah started her professional career by working with ABC affiliate, KMIZ in Columbia, Missouri, she worked there for two years. Eventually, she moved back to Tucson and got a job with NBC affiliate, KVOA. She worked there for five years and later on took up a job in Washington D.C. She worked with WRC-TV and covered major events like the 9/11 attack and the 2001 anthrax attack.

After gaining experience as a broadcast journalist, Savannah decided to pursue higher studies. She received a Juris Doctor from Georgetown University Law Center. If you are wondering, is Savannah Guthrie a lawyer? Then to answer your question, yes she is. She served as a litigate associate at the law firm, Akin Gump Strauss Hauer & Feld. She has covered many high-profile cases such as the murder trial of Carlie Brucia, the Michael Jackson trial, and the Martha Stewart case.

In the year 2007, she became a correspondent for NBC News. Additionally, she is also an NBC News anchor and a substitute anchor for the NBC Nightly News. Savannah also started working as a co-host on The Today Show, alongside Natalie Morales and Al Roker. Apart from being a journalist she has also appeared in the movie, Sharknado 3: Oh Hell No!

Drinking caipirinhas on set!! When not in Rio…

Happiest birthday to the love of my life. Thank God for her every day. Psalm 127:3 #ValeTWO

While she was working on Michael Jackson’s case, she met BBC News presenter, Mark Orchard. The couple got married in the year 2005. However, their relationship went downhill four years after the marriage. Hence, both of them decided to part ways and got divorced in 2009.

A few months after her divorce, Savannah started dating Democratic political and communications consultant, Michael Feldman. Savannah Guthrie’s husband is Michael Feldman. The pair got engaged in May 2013, while on a vacation on Turks and Caicos. They got married the next year, on March 15, 2014 in Tucson. Savannah was four months pregnant at the time of her marriage. Their first child, Vale Guthrie Feldman was born on August 13, 2014 in New York City. Savannah Guthrie is pregnant but when is she due? To answer your question, Savannah announced that she and her husband were expecting their second child on June 7, 2016.