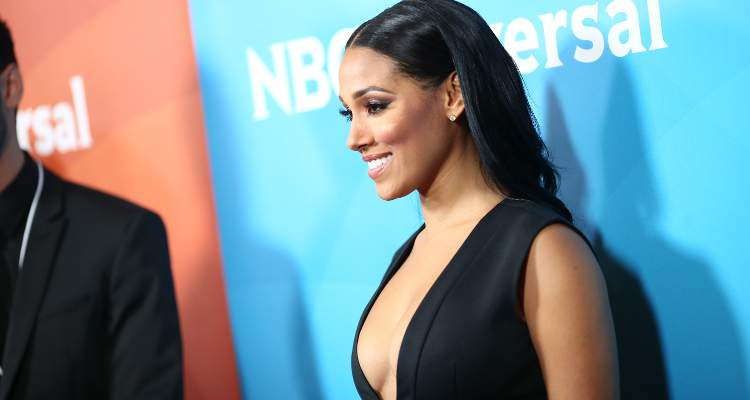 Sasha Gates is famous for starring in the hit E! reality series, WAGS LA because she’s one of the most fabulous of the ‘Wives And Girlfriends’ on the show, of course! Her net worth isn’t calculated yet, but she knows a thing or two about being the ideal football wife! Read on to learn more about her!

“Keep your frenemies closer” is the phrase of the day from last night’s (December 3) WAGS LA. While Natalie Halcro and Olivia Pierson are getting closer (thanks to their clothing line), Sasha Gates is drifting apart from her former BFF, Autumn Ajirotutu. Sasha Gates even said their relationship on WAGS is going to get worse this season. Find out all about it and more, right here in our Sasha Gates wiki.

Before she became a reality star, Gates was pretty familiar with the camera. She was born Sasha Dindayal in Canada but has African-American, Trinidadian, Chinese, Spanish, and Indian roots.

She used to work as a model and appeared in music videos by other artists. One of her famous video vixen stints was in a song by hip-hop artist, David Banner. She reportedly quit modeling and video-starring to become an entrepreneur.

Her business hasn’t been specified but her Instagram bio says she is a “Recording Artist, Fashionista, Cook, Entrepreneur, and Philanthropist.” She runs her non-profit organization called The Dolling Foundation that donates wigs to cancer patients. She has her own line of hair extensions under it.

She also acted in a handful of movies like “All Things Fare” and “Soul Food.” Recently, she switched to a music career and released a few songs like “Go Hard” and “Oh Yeah.” Last week, she released her latest song, “Sweet Gyal.” Her net worth is not known but we assume it rivals Antonio Gates’ $30.0 million.

Sasha and Antonio married in 2011 but not without a hitch. Before he began dating Dindayal, the NFL player was in a relationship with a woman named Elizabeth Patterson.

She graduated with a degree in fashion merchandising and launched her own store that catered to large, athletic-build men like her then-boyfriend.

However, they were a shortlived couple. When Sasha and Antonio married, there were a lot of rumors going around about Sasha. According to some reports, Patterson saw Sasha leave the home she shared with Gates when they were still together. A furious Patterson rammed her car into the gates of Antonio’s mansion and punctured one of her breast implants. Yikes! The San Diego Charger shrugged her off as a disgruntled ex who had fallen to drugs.

Antonio is not the only one with the bitter ex. As Ajirotutu declared during their shouting match on WAGS LA “Girl, you were a trick in the f–king videos! You were engaged to one your husband’s teammates.”

Ajirotutu was not far from the truth. Sasha was in a relationship with former NFL pro, Marcellus Wiley who briefly played for the San Diego Chargers. When she became Mrs. Gates, their newlywed bliss abruptly ended when rumors about Sasha began circulating.

It is alleged that she’s a serial cheater who saw other men behind Wiley’s back. She later dated music video director, Hype Williams but alleged infidelity also ended their relationship.

While fans were beginning to suspect her marriage with Antonio won’t last, more allegations from her past surfaced. It was rumored that she worked as an escort when she was young, was married before, and cheated on her first husband. However, none of these rumors have been proved to be true and should be taken with a grain of salt.

Sasha and Antonio’s marriage is rock solid and she is a proud mother of their two kids, daughter Ayla born in 2014 and son, Aven born in 2015.

If you haven’t missed a single second of WAGS LA, you’d know that ride-or-die gal pals, Gates and Ajirotutu are in the middle of a falling out. No one’s sure where the bitterness stemmed from, but even an attempt to patch things up exploded in their faces.

“I tried to talk to you and you didn’t respond to my texts. Your actions have proven to me that you are not a loyal friend,” Sasha declared to her former friend. She went on to proclaim that she always had her back while Autumn accused her of being a backstabber.

#tbt #birthdaylove Trying to articulate the love I feel for you is like trying to count the stars. It would be endless and I would always try to find more. You are my best friend, my safe place, my calm waters and even sometimes my rough seas. I love you to the deepest amount of my soul. You have my heart always. #sashagates #thesashaway

If you think that’s bad, the ladies dished that the worst is yet to unfold as the season progresses. “I will always have lots of love for Autumn,” Sasha tells us. “It’s really unfortunate, but it just is what it is. I guess people just grow apart.”

However, Sasha also kept the doors open for a possible reconciliation in the future. “I just like to be around authentic, real people. When I feel like something’s off and it doesn’t feel real, the core of my soul doesn’t connect the same way and I’m not going to force it. But I wish her the best. Maybe in the future we can rekindle our friendship, but I don’t know.”