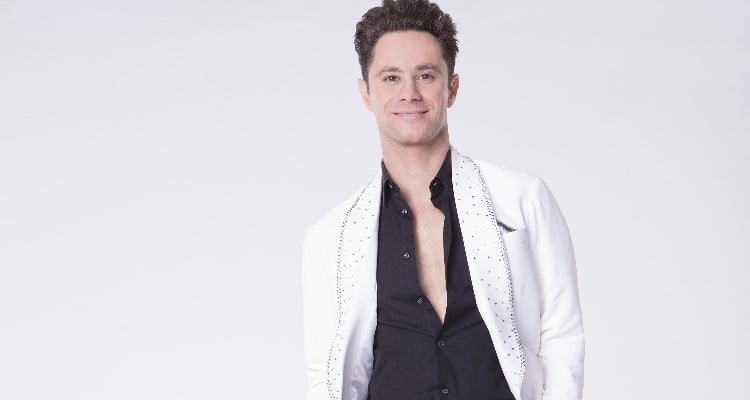 Simone Biles and Sasha Farber are a part of talented Dancing with the Stars cast. Sasha knows a little about how things work on the show, considering this is his fourth appearance on the hit series. It was on the DWTS stage where he met his love and fiancée, Emma Slater. For season 24 of Dancing with the Stars, Sasha is paired up with gymnast Simone Biles and his fiancée is paired up with Rashad Jennings.

During the season premiere of DWTS, Simone and Sasha earned the highest score of 32 out of 40 for their tango. It goes without saying that Sasha is a brilliant dancer and it looks like he and Simone have a good chance of winning the Mirrorball Trophy! Here are things you should know from Sasha Farber’s wiki.

This is my sister and I some 28 years ago. Two happy children with big smiles on their faces, with not a care in the world. Little did we know then, that when we first migrated to Australia we only had $100 to our name. Little did we know then, that exact couch we are happily seating on in that photo we found on the street as someone's garbage as we had no money and couldn't afford food yet alone any furniture. Yet we never felt poor. Mom and Dad never let us in on their struggle to make ends meet. Our parents each worked 2 jobs. Our father sold shoes and washed fridges, our mom cleaned houses and worked in a factory operating heavy machinery. Our parents never complained that life was tough or unfair. Dad was never too tired to check our homework, mom was never too tired to cook us a home meal. Our parents always had time for us. My sister and I were never deprived of affection, attention, support. We always felt like we had everything. We will forever be grateful beyond words for all the sacrifices they have endured and all the priceless life lessons they have taught us. We are where we are because of our parents! They have given us a chance for a better future, a brighter tomorrow. We love you mom and dad, and miss you both very much, can't wait to see you. @svetashapshal

Alexander “Sasha” Farber was born on May 9, 1983, in Moscow, Russia. Sasha is only 33 years old, but has achieved a lot as a talented dancer. In 1986, Sasha’s family moved to Australia, where he began dancing at the age of 13. When Sasha was 17, he won the Australian Youth Latin Championships twice and also represented his country at the World Latin Championships.

Also Read: Simone Biles and Sasha Farber on “Dancing with the Stars” 2017: 4 Facts to Know

Sasha was at the 2000 Sydney Olympic Games

Sasha Farber had become a very accomplished dancer at a very young age. Besides, representing Australia at the World Latin Championships, Sasha was featured on the 2000 Sydney Olympic Games closing ceremony. He was also a part of the second season of the Australian Dancing with the Stars and was one of the original cast members of the Broadway production, Burn the Floor.

Sasha Met his Fiancée on Dancing with the Stars

Sasha started dating fellow Dancing with the Stars professional dancer Emma Slater in 2011. In 2014, the couple broke up, but got back together in 2015. During the last season of DWTS, Sasha proposed to Emma on the show!

The couple were close friends for two years before they started dating. Though Emma and her partner, Rick Perry were eliminated the week before, she returned the next week to perform a special contemporary dance with Sasha. She did not know that she was called back for him to propose and the rest of the cast and judges were quick to run on stage to congratulate them.

Also Read: Simone Biles Wiki: Everything You Need to Know about the “Dancing with the Stars” Contestant

Emma was ecstatic, telling US magazine, “It feels like the natural progression. My mum said to me once that marriage should feel natural and not like a surprise, it should feel expected because that’s when it’s right.” She added to Sasha, “And it’s already felt like I’ve been your fiancée or your wife for years. So it feels really natural. Apart from the new heaviness of my arm, it feels really natural!”

The couple originally planned to get married this fall, but with their busy schedules and rehearsals for the show, they have chosen to postpone their big day.

I can finally scream it as loud as I can, my partner on @dancingabc is @simonebiles YESSSSSSSSSSSSSSSSSSSS , we need a team name any suggestions

Sasha has been a part of Dancing with the Stars since season 14 as a troupe member. In Season 17, he was promoted to professional dancer and his first partner in the competition was Jersey Shore cast member, Nicole Snooki Polizzi. Although they did very well throughout the season, the pair placed eighth.

In Season 22, Sasha returned as a pro dancer and his partner was actress, Kim Fields. Once again, the two were eliminated in week seven. Last season, Sasha was paired with Terra Jolé, where the two came in fifth place.

Sasha Farber has made a comeback with Simone Biles in season 24 of Dancing with the Stars and they will will be serious contenders, already earning top marks. As a gymnast, Simone already has a slight advantage, and can keep up with Sasha’s moves. Check out Dancing with the Stars on Monday nights at 8:00 p.m. EST on ABC to see how far the pair go!