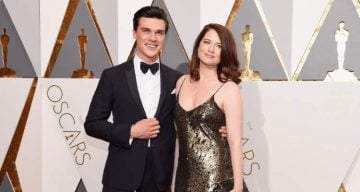 AHS fame Finn Wittrock’s wife is now enjoying watching her husband on ACS. The talented actor currently plays the role of Andrew Cunanan’s victim in The Assassination of Gianni Versace: American Crime Story. He and Sarah Roberts married in 2014. But who is Sarah Roberts? We have all the details about her, right here!

Sarah Roberts stays very much under the radar, but likes to accompany her husband to most red carpet events. The couple is often photographed at award shows and events, leaving fans constantly guessing who Sarah Roberts is. Find out more about the couple in our Sarah Roberts wiki.

#1. Finn and Sarah Were Long-Time Lovers

It was reported that Finn and Sarah went to the same college; Juilliard School of performing arts.

Sarah majored in dance, and is still a dancer, but she went on to work in the field of fashion.

The couple knew each other for a long time even before all the fame, and after dating for a good while, the couple decided to tie the knot in 2014.

When the couple decided to get married, the wedding itself was a surprise event. Sarah wore a no-fuss plain white satin gown that hugged her waist and flared down to the floor. The A-line dress had a low back, and Sarah chose a simple white veil to finish the look.

The brunette wore her hair in a bun and her bridesmaids wore nonchalant dresses in earthy tones, giving the wedding party more of a rustic feel.

Finn was dressed in a sharp black suit as he walked down the aisle to marry the girl of his dreams. The couple held their reception at Columbus Park Refectory in a vintage setting with white floral arrangements.

According to Bustle, Sarah Roberts works for Juan Carlos Obando. The brand focuses on high fashion women’s wear and accessories. It was founded a little less than a decade ago, and the L.A. based designer is now sought-after for his “out of the box” clothing.

Her stunning wedding dress was a custom Juan Carlos Obando.

Sarah Roberts and her brother Ian Roberts are twins. The Roberts’ grew up in Chicago, born to parents Lourdes and Mark Roberts. The twins seemed to have had a very happy childhood, surrounded by love.

Sarah’s brother posts family pictures now and then, but she seems to want to keep her personal life to herself.

Finn Wittrock said in an interview that he “caught the acting bug” from his father, who worked at Shakespeare & Company as an actor himself. After graduating from Juilliard, he began working with some very big names in the industry.

The actor then went on to grab the American Horror Story role of Dandy the Clown, and the rest was history.

Soon Wittrock got the opportunity to work in Unbroken, which was directed by Angelina Jolie. Now, Wittrock is playing the role of Jeff Trail (the first victim of Andrew Cunanan, who later went on to assassinate Gianni Versace).

Watch the American Crime Story Wednesdays at 10:00 p.m. EST only on FX.