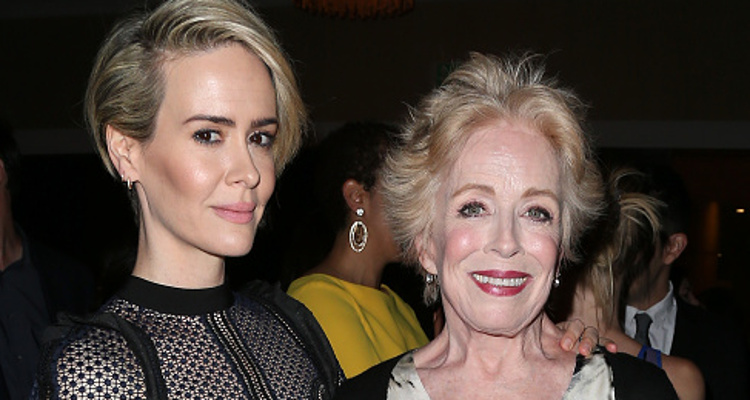 You might recognize Sarah Paulson’s girlfriend, Holland Taylor, as Evelyn Harper on the hit TV show, Two and a Half Men. She was the rich but distant mother to the Harper brothers, and fans loved her ritzy yet funny character. It has been two years since she started dating American Horror Story star, Sarah Paulson. Keep reading for more on the couple, including details from Holland Taylor’s wiki!

Who Is Holland Taylor?

Holland Virginia Taylor was born on January 14, 1943, in Philadelphia to Virginia and C. Tracy Taylor. Holland Taylor’s age, 74, has never been a problem for her or her partner. She has two older sisters —Patricia and Pamela. Did you know that Holland Taylor’s nickname was Penny Taylor because of her copper hair? She went to Westtown School in Westchester, Pennsylvania and graduated in 1963 from Bennington College with a degree in drama.

Taylor was always enthusiastic about becoming an actress and decided to move to the Big Apple to become a Broadway star. She was 22 years old at the time, and her big break was in theater. She appeared in quite a few Broadway productions throughout the ’60s and ’70s in shows like Butley and The Cocktail Hour, and was even nominated for a Drama Desk Award. Fans of the soap opera, The Edge of Night might remember her as Denise Cavanaugh, who kills herself to frame her husband. She later was seen Bosom Buddies as Tom Hanks’ demanding but alluring boss.

With this role, she showed adaptability and versatility and proved that she could portray all kinds of roles. Over the years, Taylor perfected herself and her unique acting skills and became a household name by the ’80s. She was seen in many sitcoms, where she usually played a classy, rich woman, much like her character on Two and a Half Men. Taylor was on a roll and even won an Emmy for Outstanding Supporting Actress in a Drama Series for The Practice.

Holland Taylor is a recognized face in the movie industry as well, with roles in Legally Blonde as Reese Witherspoon’s tough professor, Baby Mama, The Truman Show, The Wedding Date, and One Fine Day to name a few. She began writing and producing plays in New York and Washington, D.C. Her two-act play Ann: An Affectionate Portrait of Ann Richards, was first released in Texas and went on to be performed in Chicago, D.C. and on Broadway, earning Taylor a Tony Award nomination for Best Lead Actress in a Play in 2013.

People are wondering if the 74-year-old is actually married to Emmy winning actress, Sarah Paulson. Though the duo sport a ring on their oh-so-important fingers, neither have confirmed getting married. They have been public about their relationship though, and have gone on record to say how much they adore one another. In an interview, Taylor said, “We had known each other in passing, seeing each other at awards shows and stuff like that or on the lot, I think I once offered her a lift…she was going in a different direction and 10 years later, she did see me in a tweet and she thought I was blue about something and she said, ‘How are you? What’s happening?’ And we got together shortly after that.”

Paulson is always close to Taylor when they are on the red carpet or at an event. The duo are constantly being seen on the street as well, holding hands, cuddling, and looking adorable. While it’s no surprise that they are in love, there has been no confirmation on what the future holds for them. Rumors of the two having a baby were out, but Paulson was quick put them to rest saying, “I don’t know. I’m getting a little old, so there’s cobwebs going on in them ovaries, so we’ll see what happens.” Funny as ever, Paulson and Taylor might just surprise us all soon!

Holland Taylor has been in Hollywood for more than 40 years now and she is nothing short of a talented actress. She has played some really unique roles and has earned nothing but praise (and nominations) for her work. Taylor’s net worth is estimated to be $18.0 million. She reportedly received a salary of $75,000 per episode for her role in Two and a Half Men. With a lot more up her sleeve, along with writing and producing plays as well as a role in the upcoming sci-fi comedy The Orville, Holland Taylor seems to be doing better than ever!