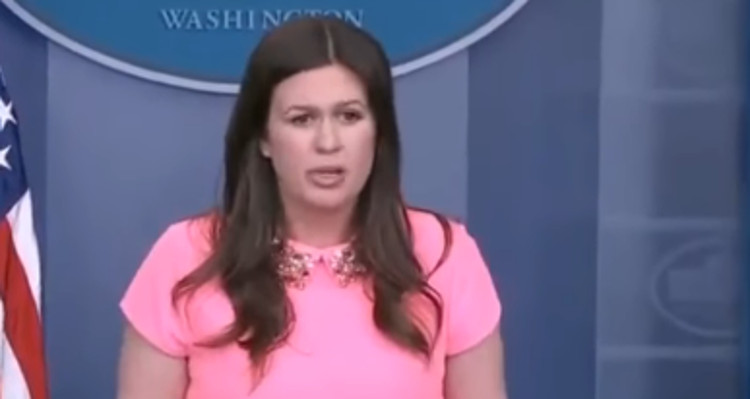 FBI Director James Comey was fired by President Donald Trump on May 9. While trying to get back to his office after an interview, Press Secretary Sean Spicer’s path was blocked by press with questions about the latest development. Instead of rising to the occasion, he hid in the bushes. Press office executive assistant Janet Montesi then appeared in front of the press, advising them that Sean Spicer would only answer questions “as long as he was not filmed doing so.”

Catching up with my dad @GovMikeHuckabee in NYC tonight. He's off to @KellyFileFNC and I'm headed to @donlemon! pic.twitter.com/pDcgSIQqP4

Sarah Elizabeth Huckabee Sanders was born in August 1982. She is the daughter of politician, author and commentator, Mike Huckabee and former First Lady of Arkansas, Janet Huckabee.

She has two brothers: David, a mortgage broker who worked on his father’s 2008 campaign to be governor; and John Mark. Sanders attended Little Rock Central High School, located in Little Rock, Arkansas and went to Ouachita Baptist University.

She Helped with Her Father’s Campaign

With Sarah Huckabee Sanders’ age being 34, most would not expect her to have much political experience. At the age of nine, she would put up signs on people’s yard, stuff envelopes, and go door-to-door for Mike Huckabee’s campaign.  In 2002, she had a role in her father’s campaign for re-election as the Governor of Arkansas.

When she was 26, Sanders worked as a national political director for her father’s presidential campaign. Because John McCain was leading, Huckabee decided to pull out of the campaign and support McCain.

She was a Senior Advisor to Donald Trump’s Campaign

After Sarah’s Huckabee Sanders’ father dropped out of the 2016 presidential race, she was hired as a senior advisor to Donald Trump. About her decision, Sanders said, “I keep hearing all these pundits and people from the media and other politicians talking about how bad Donald Trump is for America and, in particular, how bad people are that support Donald Trump.” She further added, “My thing is that they’re not bad for America, they are America…They are hard-working, God-fearing people who are sick and tired of the government stepping all over them and they want someone to help just clear the path and get government out of the way.”

Her Husband is Bryan Chatfield Sanders

Sanders got married to Huckabee’s 2016 media consultant, Bryan Chatfield Sanders on May 25, 2010. The ceremony was at Nazareth Lutheran Church at Cruz Bay on the island of St. John in the U.S. Virgin Islands. Sarah Huckabee Sanders and her husband have three children. The family currently lives near the White House, in Arlington, Virginia.