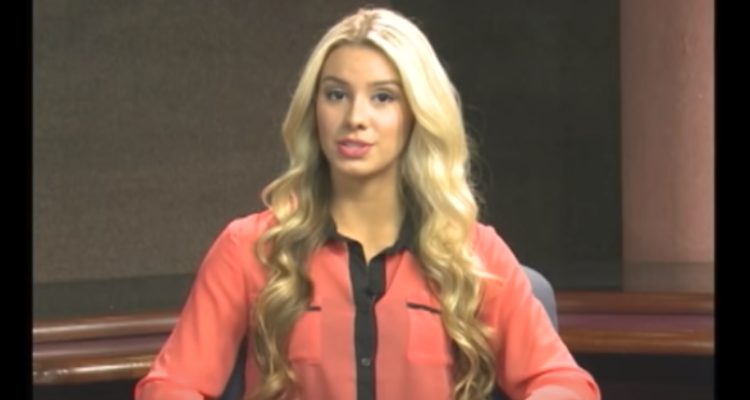 This holiday season was extra-special for ESPN sideline reporter, Sara Cardona. While the bleach-blonde beauty from Nashville, Tennessee has been heating things up as a sportscaster, she also broke official word to the New York Post that she is now NFL player, Eric Saubert’s girlfriend. Check out our Sara Cardona wiki below for more facts about this rising sportscaster.

Sara Cardona, age 23, is of Colombian descent, hailing from Medellin, located in Colombia’s Antioquia province. She attended the University of Tennessee-Chattanooga from 2012 to 2016, where she was active with the student TV station. Currently, she is a resident of Nashville, Tennessee.

Notable achievements for the Southern Belle include representing Miss Greater Nashville as a contestant in the 2016 and 2017 Miss Tennessee USA beauty pageants, where she placed 2nd runner up and 3rd runner up, respectively.

She also appeared in the music video for Kid Rock’s First Kiss, released in 2015 off the album of the same name.

Kid Rocks first kiss music video is out. Had a blast getting to be in it. Here's some clips, go check out?

Prior to working for ESPN, Sara was a sportscaster for Fox 17 in Nashville.

On Wednesdays we wear pink ?

She worked for ESPN as a sideline reporter for a college football game in October 2016, and was officially picked up as a reporter by the network in February of this year.

Sports she has covered for ESPN include basketball and football. Projections for her career are strong, with some saying that she could be “the next Erin Andrews.”

Always eating but never this neatly ???

There’s a reason that Sara Cardona is gaining popularity. She has a great body, and no qualms about flaunting it on her Instagram account! Whether she’s wearing bikinis, formalwear, or more modest business attire, her beauty always radiates through! Check out some of Sara Cadona’s hot pics below to see exactly what we mean!

Lifeguard on duty ❌ swimsuit from @heartswoon

Can't think of a better way to spend my Saturday ??

Wishing I was in Colombia ?

Thanks @titlegreenhills for the killer workout ???

Sara Cardona’s Instagram is a hot destination, as she boasts over 70k followers, a number that grows daily. She is proud of her Colombian heritage, and cites Psalm 28:7 in her description.

But clearly, this blonde beauty has moved on. It was on Christmas day that she posted a cute photo to Instagram of herself being held by Eric Saubert while decked out in matching Santa hats and sitting in front of a festively-decorated Christmas tree. The pair have been dating for several weeks, with the Instagram post making their relationship official.

Eric Saubert is a rookie tight end for the Atlanta Falcons, who was selected in the fifth round of the NFL draft as the 174th-overall pick. He is the third-string tight end behind Austin Hooper and Levine Toilolo. Considered a player with a good combination of size and speed, Saubert has been criticized for an inability to catch. This hasn’t stopped him from landing a great catch in Sara Cardona, however!