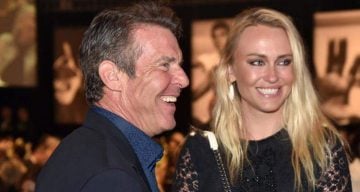 Who is Dennis Quaid’s girlfriend? After pics of the couple on a beach surfaced earlier today, many are wondering who the actor’s blonde “bae” could be. The two look incredible, though many are pointing out how noticably younger she looks than her famous man. Is she famous? How long have they been together? For all the details, have a look at our Santa Auzina wiki.

Who is Santa Auzina?

The mystery woman is a model and is French-Canadian, originally from Montreal, Quebec. As for Santa Auzina’s age; she’s 31! For those who need a refresher, despite Quaid’s fit physique, he’s still 63 years old. But age never stopped these two! And they aren’t really a “new” couple, though they seem to have kept their relationship on the down low. They met in Montreal on the set of his TV show, The Art of More and have been spotted in public since 2016, shortly after Quaid divorced his third wife, Kimberly Buffington.

In a statement regarding their split, the exes said, “After careful consideration, we have decided to end our 12 year marriage. The decision was made amicably and with mutual respect toward one another… We will always remain great friends and devoted partners in raising our children.”

According to an Instagram exchange with one of her followers, Auzina has been spending a lot of time in Los Angeles, especially back when she was working with ABC’s Quantico crew.

“I know, it’s like I came to visit and ended up staying and living here now, I’ll try come Montreal before winter hits so we’ll get our Quantico crew for a get together [sic],” she said.

Like Quaid, Auzina also has children of her own; 5-year-old twin girls, Skylar and Chelsea. And it looks like she’s on good terms with her ex, too. Auzina dedicated an Instagram post to her daughters’ father on Father’s Day, saying, “Happy Father’s Day to the most amazing father in the whole world , I couldn’t have asked for a better father for my girls . You are the most caring , loving , protecting daddy the most fun and patient , you really are the number 1 dad . Skylar and Chelsea are blessed to have you [sic]”

Jack, Quaid’s son with ex-wife Meg Ryan, opened up about his father and his childhood when his parents got divorced.

“I acknowledge fully that the way that I grew up was not normal,” the Vinyl actor, 25, said to UsWeekly. “But at the same time, despite what my parents do, they’re still a mom and a dad. They’re not like characters at the dinner table. My dad has never been Jerry Lee Lewis at my graduation, nothing has gone down like that. I have perspective on it simply if all the other kids I grew up had celebrity or actor parents. Then I’d think, ‘This is the world!'”

He continued, “My parents got divorced when I was 8. It’s one of those weird ages [for kids when their parents] get divorced. You’re old enough to know what’s going on, but young enough to be kind of naïve about it.”

For Santa Auzina’s hot pics, head over to her Instagram to see the model in action! Many of her photos are of her with Quaid, her children, as well as other famous people. She and Quaid travel the world together and are never far apart from each other. Could the young model end up being Quaid’s fourth wife? Let’s hope not!