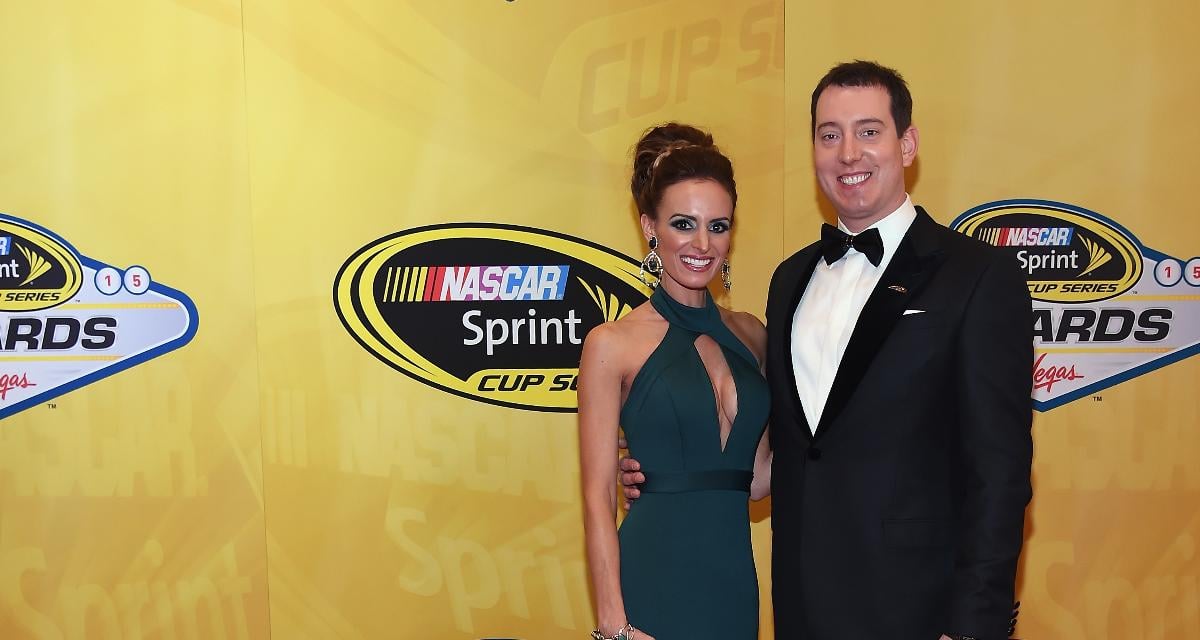 Kyle Busch added another Monster Energy NASCAR Cup Series win to his grand 2018 season, coming in first at the Can-Am 500 at ISM Raceway on Sunday, November 11. In his 14-year career, his amazing wife, Samantha Busch, has been his biggest supporter. Samantha is more than just one of the hottest WAGs of NASCAR. And she’s now set on making her reality TV debut. Our Samantha Busch wiki turns the spotlight on this inspiring woman.

Born Samantha Sarcinella on June 1, 1986, this St. John, Indiana native is 32 years old. Before she met Kyle Busch, NASCAR was an unknown world to her.

She graduated from Purdue University with a bachelor’s degree in psychology. She went on to get her masters in industrial/organizational psychology through online classes at Austin Peay University.

During the time she was a student at Purdue, Sarcinella was working at the Brickyard 400 NASCAR Sprint Cup race at Indianapolis Motor Speedway.

She happened to run into a certain guy named Kyle Busch there. Because she didn’t follow racing, Sarcinella didn’t know what Kyle did, nor did she know that his brother was the veteran racer, Kurt Busch.

“(We) kind of just crossed paths and exchanged numbers and the rest is history,” said the future Mrs. Kyle Busch.

Samantha and Kyle tied the knot on December 31, 2010 in Chicago. Their wedding was televised in an hour-long special, Fast and Furious: A NASCAR Wedding, on the Style Network.

Since being with Kyle Busch, Samantha has learned the ins and outs of NASCAR. She’s not only become his biggest cheerleader on the speedway, but she’s also involved in Kyle Busch Motorsports NASCAR Camping World Truck Series team and merchandising.

Since becoming a prominent personality off the track, Samantha is ready for TV again. She’s joining her sister-in-law, Kurt Busch’s wife, Ashley Busch, and other NASCAR WAGs like Whitney Ward Dillon in the upcoming CMT reality series, Racing Wives.

Check out the preview for Racing Wives below.

Samantha Busch was diagnosed with polycystic ovary syndrome two years after her wedding. The condition causes hormonal imbalances and can interfere with fertility.

On the doctor’s advice, Kyle and Samantha conceived through in-vitro fertilization (IVF). Their son, a boy they named Brexton Locke Busch, was born on May 18, 2015.

It’s been a busy couple of days, so happy to come home to these boys that give me all of their love and support! I’m a lucky girl! ??

In October 2018, Kyle and Samantha revealed their plans to have a second child through IVF. Samantha underwent a procedure to remove a polyp from her uterus on October 18, 2018.

In early November, Samantha did the embryo transfer procedure. Hopefully, we’ll be hearing news about the new addition to the Busch family soon.

Kyle and Samantha documented the procedure in a short clip titled Our IVF Journey to encourage other couples struggling with infertility. They expressed their desire to share their journey to have a second child in detail along the way.

Today was the big day, we got to have our baby girl transferred! We are praying this all goes as planned and we can continue to grow our family. It’s been an amazing journey and I am so thankful for all the prayers and words of encouragement you guys have shared. For everyone who continues to go through this same journey, we are here for you and will continue to keep you in our prayers as well. So much love for you all. ? (full video on Facebook sorry IG only lets us do a min!) #IVF #embryotransfer #IVFjourney #IVFcommunity #IVFfamily #PCOS

The couple also set up the Kyle and Samantha Busch Bundle of Joy Fund to provide financial support to couples seeking fertility treatments. Since 2015, the couple has distributed over $325,000 to help 27 couples. Samantha also spreads awareness about polycystic ovary syndrome and IVF.

When she was not accompanying her husband to his races, Samantha found herself wanting a passion project of her own. A self-proclaimed “boss babe,” she built her lifestyle brand, first with the launch of her eponymous website.

She’s blogged about everything from fashion, beauty, and fitness, to food, lifestyle, and IVF. Her popularity grew, earning her over 124k followers on Instagram.

Samantha’s lifelong dream was to have her own fashion business. She achieved that step in 2017, with the launch of her online store, Murph Boutique. The store is named after her grandmother, Alvina, who was nicknamed Murph.

Her grandmother inspired the confidence in her and helped shape the Samantha Busch we see today. It’s because of this amazing confidence that Samantha is able to hit back at haters and encourage her Instagram followers to be themselves.

Incidentally, Samantha’s Instagram post slamming haters was published on January 25, 2018, a day before her grandmother’s birthday and the first anniversary of the launch of Murph Boutique.