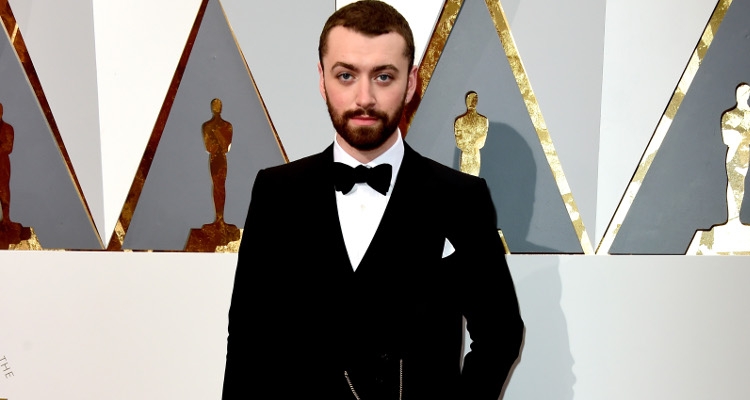 Is there another potential Hollywood couple in the works? The “Too Good at Goodbyes” singer was seen kissing one of the stars of Netflix’s 13 Reasons Why. Now, Brandon Flynn is rumored to be Sam Smith’s boyfriend! Find out if the two are dating and more, right here!

Singer-songwriter Sam Smith is known for his soulful songs about love and heartbreak. After recently releasing new music after a two-year gap, the young artist’s personal life is now making headlines. Although Sam Smith’s age is just 25, he has already won four of the six Grammy Awards his debut album was nominated for, and fans cannot wait for more news about his second album!

Smith gave the paparazzi and fans a lot to ponder over when he was spotted with Brandon Flynn, age 23, who plays Justin in 13 Reasons Why. After seeing the pictures, some fans wondered if Sam Smith is gay.

The singer came out of the closet in May 2014, and revealed in an interview, “I’ve never been in a relationship before. I’ve only been in unrequited relationships where people haven’t loved me back. I guess I’m a little bit attracted to that in a bad way. [My debut album] In the Lonely Hour is about a guy that I fell in love with last year, and he didn’t love me back. I think I’m over it now, but I was in a very dark place. I kept feeling lonely in the fact that I hadn’t felt love before. I’ve felt the bad things. And what’s a more powerful emotion: pain or happiness?”

At the 2015 Grammy Awards, he publicly hinted about his breakup with model and actor Jonathan Zeizel while accepting the award for Record of the Year, and said, “This is the best night of my life. Just a quick one: I want to thank the man who this record is about, who I fell in love with last year. Thank you so much for breaking my heart because you got me four Grammys.” In an interview, the singer also explained being regretful for making their relationship public too soon, “I made a mistake by posting pictures of us on Instagram and making it seem more serious than it was. I’ve learned that I need to hold off before I start getting the public involved.” Well, it looks like he might have found love once again, as Sam Smith was seen kissing and holding hands with Brandon Flynn!

According to sources, on Monday night, Smith and Flynn went to a restaurant with a few friends. They were seen getting “cozy” in the dining room before they went to the rooftop bar to dance and drink.

As of now, neither have confirmed being in a relationship. So, we might just have to keep a close eye on them for more proof! On October 7, Smith will be the musical guest on SNL, appearing alongside Gal Gadot. If he decides not to say anything about his relationship, at least we can hear his new single live!