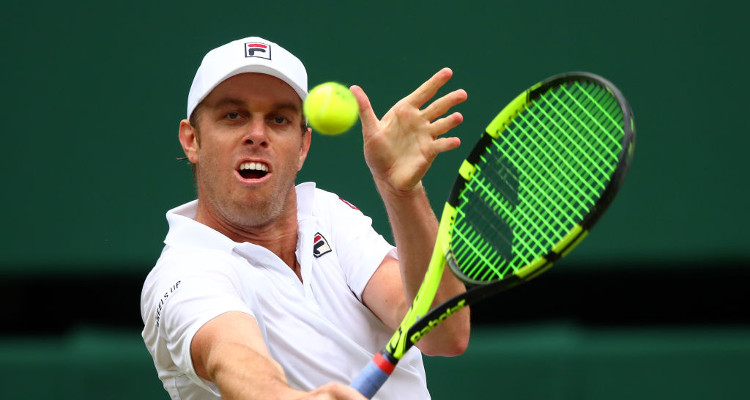 Sam Querrey came out of nowhere and upset world No. 1 Andy Murray at Wimbledon 2017. This is perhaps his best match yet, but he’s focused on the semi-finals now. Querrey will play against Marin Cilic in the Wimbledon 2017 semi-finals.

British tennis fans are disheartened by the defeat of No. 1 seed and defending champ, Andy Murray at Wimbledon 2017. But Sam Querrey, the American player who defeated Murray in a shocking upset, has asked them to “chill.” He has no time for disappointed fans. He’s got the semi-finals against Marin Cilic to focus on. Before the match, find out about this rising tennis star in Sam Querrey’s wiki.

Born in San Francisco, Sam Querrey was introduced to tennis at the age of seven. His father, Mike Querrey, worked as a mortgage banker who had the option of an MLB career. But Mike didn’t want his son to follow his path.

Sam was offered a scholarship from University of Southern California, but he turned it down to go pro. Mike was drafted by the Detroit Tigers in 1979, but turned it down to attend college. When Sam’s turn came, his father encouraged to aim for pro.

“My dad told me when I was signing my contract, ‘Don’t do what I did,’” Sam said, “He told me to take the shot while it’s there and do your best. I think he regrets not taking a chance when he had it.”

Querrey became the first player to win a challenger event in his pro debut at the Yuba City and Winnetka Challengers in 2006. He won his first ATP level tournament in 2008, the same year he was defeated by Rafael Nadal in the Beijing Olympics and Davis Cup match.

His stats on the Wimbledon website show that he has won over 300 matches in his career. He has won nine titles so far and over $8.0 million in prize money. He steadily climbed to the top until his highest ranking of No. 17. He is currently ranked No. 28 in the singles division, and has earned a net worth of $12.0 million in his entire career.

Querrey’s ace in the hole is his powerful serve. He is right-handed and uses a double-handed backhand. But in 2009, a freak accident threatened to end his career. It was a normal day in the men’s locker room at the Thailand Open Tournament. After a practice and shower, he sat on a glass-top coffee table to put on his socks and shoes.

Unexpectedly, the glass shattered under his weight. The largest piece was the one that impaled Sam’s right arm. After an emergency surgery, he only has a three-inch scar to remind him of what happened. The glass missed a nerve which, had it been punctured, could have ended his career. He missed the late-season matches that year and was ranked No. 25.

He was in good spirits, hanging out with friends and going out on Halloween as a shark-attack victim. But when he did make a comeback the next year, he made it to his highest ranking yet.

Swimming with my homie. #flipper @madisonkeys

#4. A Quirky Band of Support

Sam’s friends from his alma mater, Thousand Oaks High School, have a funky way of showing their love for him. They formed a fan club called Samurai Club (pretty genius). And they don’t just sit on the stands and cheer with loud voices, they have their own style of cheering their namesake.

Members of the Samurai Club are known to attend Sam’s matches shirtless! They wear Samurai headbands and paint the words “S-A-M-M-Y” or “S-A-M-U-R-A-I” on their torsos. But Querrey’s fan club has been criticized for their rowdy cheering.

#5. He Needs No Matchmaking

The 29-year-old tried finding love on TV —and we’re not talking about The Bachelor. He appeared on the show, Millionaire Matchmaker where host Patti Stanger tried to set him up with a lucky lady. But it didn’t work out. He later tweeted that he was open to being on The Bachelor.

But ABC doesn’t need to come knocking yet. The tennis pro is now dating a gorgeous model, Abby Dixon. She not only cheers on her boyfriend at his matches, she also takes a stand against haters who abuse players after they lose.