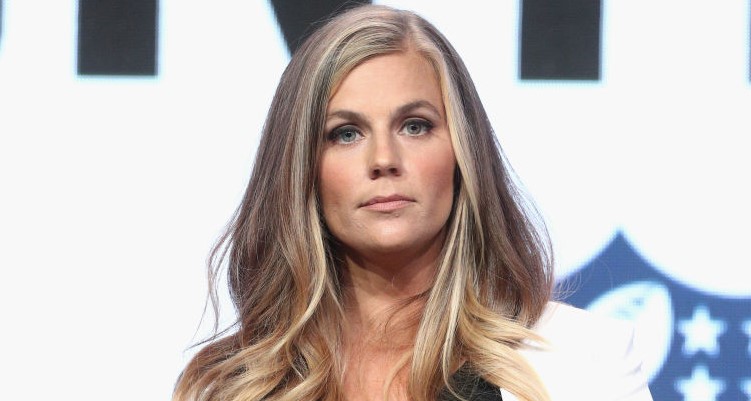 ESPN host Sam Ponder put Barstool Sports founder, Dave Portnoy on blast for sexist comments that he made years ago. What did Portnoy say and did Ponder fire back? Here’s everything you need to know with our Sam Ponder wiki.

Who is Sam Ponder?

Sam Ponder’s age is 31 years old. She was born Samantha Sainte-Claire Steele on December 11, 1985 in Phoenix, Arizona, to Cindi and Jerry Steele. She graduated from Liberty University and is the host of Sunday NFL Countdown on ESPN.

Sam Ponder’s husband is Christian Ponder,29, a free agent quarterback who played for the Minnesota Vikings and Oakland Raiders. They have been married since 2012 and have a daughter together, Bowden Sainte-Claire, also known as “Scout” (after the narrator of To Kill a Mockingbird), to her family.

In an interview with Parents.com, Sam talked about parenting and how she appreciates the help she gets from her family when traveling and raising her daughter.

“My parents lives down the street in the house I grew up in, said Sam. “I have an older sister and two younger brothers and we’ve all come back. It’s been fun having the family so close. Technically Scout is an only child but she’ll have a kid related to us in every grade of the school she’s going to. It’s just crazy. Makes it fun for sure.”

If you’ve been searching for “Sam Ponder’s hot pics” —don’t bother—her Instagram is privately set. According to Parents.com, the ESPN host often writes on her Instagram about how much respect she has for stay-at-home-moms.

“My sister has five kids under 7,” said Ponder. “They live down the street from us in Phoenix. I’ve seen her journey. It’s just insane. She is a super hero and I don’t know how she does it. Forget dishes, but just keeping everyone functional is harder than anything I do all year at work. I consider my job a vacation that a lot of my friends that are SAHMs don’t get. I get to go out and have interactions with other adults and talk about things other than Yo Gabba Gabba.”

She continued: “I have so much respect for women that are full-time moms in the house. It’s such a difficult job. My mom did it and I had no appreciation for it when I was growing up. Luckily she lives down the street now so I can thank her. Better late than never.”

It looks like sexual harassment in the workplace isn’t just being reported in Hollywood this week. Ponder won’t stand for the comments made by Portnoy and she recently used Twitter to fight back with her latest response saying, “Don’t feel sorry for me. I have a voice. & even though it can be scary to use it sometimes, (as all my DMs right now confirm) if those of us who have a platform don’t use ours, those without one may not use theirs either.”

Ponder originally thought the 2014 comments came from Barstool’s Dan Katz, but it was actually Barstool’s President, Portnoy, as clarified by Ponder.

“I was wrong in thinking @BarstoolBigCat wrote that article & called me a slut repeatedly. He just continuously laughed along. It was the PRESIDENT of @barstoolsports who said these things. Happy to clarify.”

ESPN’s EVP Burke Magnus informed USA Today in a statement “that the comments about Sam Ponder were offensive and inappropriate, and we understand her reaction. She is a valued colleague and doing a great job for us. As stated previously, we do not control the content of Barstool Sports. We are doing a show with Big Cat and PFT, and we do have final say on the content of that show.”