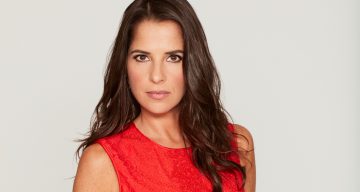 Avid fans of General Hospital can never catch a break. The soap opera has so many twists and turns that fans are naturally wondering if their favorite character is leaving. Kelly Monaco, who plays Sam McCall, now has fans questioning her fate in General Hospital.

If you watch Sam on General Hospital, then you should be aware that she has a tough decision on her hands. Sam has to decide between Jason and Drew, and it appears that she made her decision. So, is Sam McCall leaving General Hospital?

Read these General Hospital spoilers to know what’s in store for Sam McCall.

In the latest episode of General Hospital, Sam McCall dropped by Aurora Media to have a little talk with Drew Cain (Billy Miller). As we all know, Sam is on the fence about the two guys she loves—Drew and Jason.

Sam tells Drew that she’s leaving Port Charles for some time off. If all goes well, she will have hopefully decided between him and Jason Morgan (Steve Burton).

They have an emotional parting wherein Drew asks her if Jason will accompany her. But Sam replies that she’s going to spend time with her children, away from both the men.

Drew then lets Sam go, still hoping that she’ll choose him in the end.

Fans are still debating on whether Sam should pick Drew or Jason. However, Team Jason and Team Drew are united on one common question—is Sam leaving for good?

Although we saw Sam bid farewell to Drew, it’s not a permanent goodbye. She’s not leaving Port Charles forever.

Kelly Monaco has been dogged with rumors about leaving General Hospital for years. And they have all been untrue.

However, Monaco almost exited the show in 2009. ABC had announced a casting call for possible actresses to replace Kelly Monaco on General Hospital. However, her co-stars on the daytime soap denied that she was leaving.

It turned out that ABC was only covering its bases while they renegotiated the terms of Monaco’s contract. The actress continued on the show after negotiations.

The Baywatch actress first debuted as Sam in General Hospital in 2003. She has since balanced her daytime gig with other projects, including winning the first season of Dancing with the Stars. Monaco even starred in the General Hospital spin-off, Port Charles, as Livvie Locke.

Even though Sam’s farewell to Drew felt ominous, we don’t have to say goodbye to Monaco yet. The actress herself hasn’t commented on her status on the show.

Monaco isn’t active on social media. But in a 2016 Twitter Q&A, she professed her love for her character on the show. And, it’s very unlikely that she’s leaving the show she’s been on for more than a decade without a statement.

Thank you all for your continued support. I love playing Sam. It's been a pleasure tweeting with best fans in daytime. #Gh #askgh

Until we get official confirmation, it’s best not to fret about Sam’s status on the show. Monaco is probably taking a little break from daytime television before she returns.

While Team Drew and Team Jason clash on social media, Drew and Jason themselves will be dealing with Sam’s absence in their own way. Meanwhile, spoilers indicate that Jason will have no time to think about Sam with the drama coming his way.

Keep watching General Hospital weekdays on ABC to find out how Sam’s love triangle pans out.