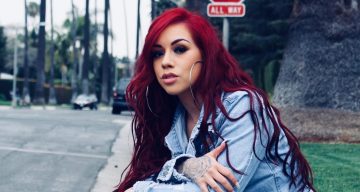 YouTube’s fiery hot Salsa Rosa aka Salice Rose has a girlfriend! She took to the video-sharing website to announce that she has found love. Rose, 23, was in an abusive relationship in the past but has now overcome her fear of loving someone new! So, who is Salice Rose dating? Get the scoop on her current and previous relationship here!

Salice Rose is keeping mum about the identity of the lucky woman she’s dating. But the comedienne-musician did open up about how she and her new girlfriend almost moved in together after dating each other for “just a few months.”

Find out more about Salice Rose’s love life, along with details from her past relationships.

Salice Rose Is in a Long-Distance Relationship

On July 11, 2018, Rose posted a video telling her fans that she has been dating someone for some time now. She refers to her girlfriend as “Carol” but that’s not her real name.

She said that they don’t live in the same state and long-distance relationships are hard work. They have a very hard time saying goodbye to each other at the airports every time they visit one another and miss each other a lot when they can’t meet up.

Rose, who is of Peruvian background, expressed that just last week, she and her girlfriend were returning from San Diego from her dad’s house when they were faced with the decision as to whether they should move in together.

The lovers were going to take different Uber rides to their respective homes but couldn’t part ways. So, Salice Rose’s girlfriend suggested that she move in with her out of state.

Rose, who is a “need more time” kind of a person, contemplated it and eventually hopped into her girlfriend’s Uber! But a few miles into the journey, she asked the driver to pull over and was headed back home to Los Angeles in no time!

The couple seems to have not yet reached that point in their relationship where they feel that they should move in together. But now fans are wondering if the hesitation has something to do with the fact that Salice Rose’s ex-girlfriend abused her to no end for five years.

Rose recently posted another video and opened up about her abusive relationship several years ago with another woman, who she also didn’t name.

She was fresh out of military school and had found herself and what she wanted to do in her life, when she met and fell in love with her ex-girlfriend.

The 23-year-old explains that her ex raised her hand to her for the first time just one month into the start of the relationship. She said that she let it go because she thought she was utterly in love with the woman.

The beating, hair pulling, punching, and hitting went on for five years before Rose could put a stop to it all. She thought she could change the woman she was in love with, but the physical and mental abuse just got worse with time.

Rose recalled a moment when her ex bashed her head against the car window repeatedly when she stopped her ex from taking pills to kill herself! That was the moment she decided to flee and managed to run out of the car, but her ex pursued her. She grabbed her and dragged her back into the car by the hair.

She would even torture Rose by making her walk barefoot on a blistering hot day and laugh at her. Rose said that she was scared for her life, and that she ended up getting out of that relationship herself.

Rose made the video to help others who are going through an abusive relationship. She wants to raise awareness that abuse is not okay.

The YouTuber appears to be in love with her latest girlfriend by the way she talks about her sweetheart. And we hope that this is the woman Rose has been waiting for!

Click on the link below to know more about Salice Rose’s current relationship: