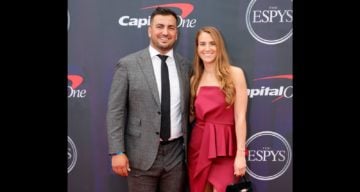 Did Sabrina Ionescu make her relationship Instagram official? The WNBA pro surprised her followers with a cute post wishing her alleged boyfriend a happy birthday. Said boyfriend was identified as Hroniss Grasu. Yes, the NFL free agent who recently played with the San Francisco 49ers. Fans are eager for more confirmation and want more details about this new couple. Here’s what you need to know about Sabrina Ionescu’s relationship.

Who Is Sabrina Ionescu’s Boyfriend?

New York Liberty star Sabrina Ionescu took to her official Instagram page to wish a certain someone well on his birthday. Instagram users were quick to recognize the person with her in the posts as Hroniss Grasu, who celebrated his 30th birthday on August 12.

Ionescu’s Stories revealed they celebrated his birthday together. She also shared wishes from other people on her Stories.

The caption which read: “30• Happy Birthday to my person! Always smiling with you🤍 #HG” made it sweeter. Ionescu’s followers were quick to deduce that they’re a couple, and they love them together.

The couple is yet to reveal any details about their relationship. Moreover, the NFL pro isn’t very active on social media.

Social media users, though, are loving pointing out everything this couple has in common. For starters, both athletes are of Romanian descent and come from California.

Both also attended the University of Oregon and played for the Ducks. In recent history, they joined other notable Oregon alum to film a video encouraging students to hang in there amid the ongoing pandemic.

Grasu was selected by the Chicago Bears in the 2015 NBA draft. He has since played with multiple teams before his recent free agency.

Ionescu was selected by the New York Liberty in the 2020 WNBA draft. She also played for the U.S. national team with fellow Ducks teammate, Ruthy Hebard.

Fans hope the couple will give more insight into when and how they began dating. In the meantime, they cant help gushing over how cute they look together in the comments section.