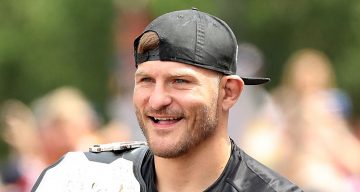 Stipe Miocic is one of the top fighters in the UFC. He is their heavyweight champion and travels the world fighting for the title. Not only that, he kept his day job. It takes a certain kind of person to be able to handle a partner with a busy lifestyle like that. So keep reading to know all about Stipe Miocic’s wife, from her career to what she thinks about her husband’s job, in Ryan Marie Carney’s wiki.

Details about her personal life aren’t very public but here is what we do know. Ryan Marie Carney’s age is approximately 30 years old.

We don’t know when Ryan Carney and Stipe Miocic met, but we do know that they dated before their relationship became public in 2013. The couple got married on June 18, 2016, in Parma, Ohio.

Carney was originally trained as a hairstylist and worked as a cosmetology instructor at Cuyahoga Valley Career Center and Normandy High School. Later, she trained as a nurse at Cuyahoga Community College. Her nursing career gives her a unique perspective on her husband’s career.

While talking to CBS19, she spoke about watching her husband fight and said, “I’m always just worried about injuries, and making sure he walks out with very minor injuries, hopefully…”

When you are just a little bit happy ??

There’s a very practical aspect to her career as well. She accompanied her husband to UFC 198, which took place in Brazil. If Miocic was injured to the point of needing serious medical attention, Carney would have been able to help navigate the issue with doctors.

She noted that she does worry a little when Miocic fights, but respects the fact that this is one of his chosen professions and that he doesn’t go into them blind. He prepares the best that he can, not only to win the fight but to also mitigate injury and damage that may occur.

You can find plenty of  Ryan Carney’s pics on Instagram. She often updates her account with posts of her husband, friends, and dogs, as she is a huge dog lover.

The man who stole my heart ? he is so needy!

Carney’s Instagram also contains numerous posts dedicated to first responders, which doesn’t come as much of a surprise due to her profession as a nurse and her husband’s day job as a firefighter. It’s also not unusual for her to post a pic or two from the gym or when she occasionally joins Miocic on one of his training sessions.

Ryan Marie Carney also has a Twitter account, but it doesn’t appear to have had any posts since 2013. She also has a Facebook page, but doesn’t often post on it. When she does, it’s usually trying to find help for a dog that has found their way into a shelter.

Thanks @russorick81 you do incredible work! ???