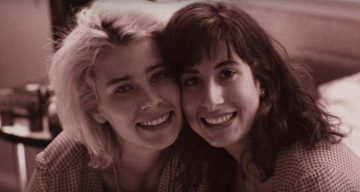 Ruth Litoff was an artist who passed away tragically. Nine years after her death, her sister is trying to figure out her thoughts at the time in the HBO documentary, 32 Pills: My Sister’s Suicide.

Hope Litoff, a filmmaker, is turning the camera on herself but the subject is her sister, Ruth Litoff. The artist, Ruth Litoff passed away, but her sister is keeping her memory alive through 32 Pills: My Sister’s Suicide, an HBO documentary. Hope explores mental illness, suicide, relapse, and grief in 32 Pills. Ruth Litoff’s cause of death may be suicide, but the emotions run deep in this blunt showcase of her life. Know all about the talented artist who is gone too soon, in Ruth Litoff’s wiki.

Both Ruth and Hope shared a common love for the arts. Very little is known about Ruth who is three years older to her sister. The Litoffs were a very prominent Jewish family in New York.

They were the only children in their family and growing up, and Hope looked up to her sister as her role model. Ruth excelled in everything she did, including sports, school, and making friends.

The sisters shared a close bond owed to the lack of affection from their dysfunctional home life. By Hope’s account, their mother was obsessed with looks and keeping up with Ruth’s mood swings overwhelmed her. Their father was cold and irresponsible, “a very 1950s Mad Men”, who was aloof from his daughters. Their mother died a year before Ruth, their father a couple of years after.

When Hope took a summer filmmaking class at Tisch School of the Arts in New York City, her first assignment was to make a short film on someone she admired. Naturally, she chose Ruth as her subject. When Hope looks back on that interview, she calls it awful.

“I often speak of Ruth’s impossibly high standards and I guess a bit of that is in me because I threw all the tapes away when the class was over,” said Hope, “I would give anything to have that rare footage of 21-year old Ruth back talking about her photography.”

Ruth is described as a complex, dark, and brilliant art photographer who had a busy social life. Her creative mind was in a constant state of flux. Hope recalls her sister was very open about her sexuality and was never without a boyfriend. Ruth had a penchant for nude photography and had photographed every one of her boyfriends nude.

In the search for self-identity, Ruth took countless artistic self-portraits with themes ranging from emotions like pride to self-loathe. Her artwork, which included images of flowers, street photography, diorama models, and meaningful tchotchkes were all about her seeking reassurance that she was loved.

According to the 32 Pills website, photography was Ruth’s main medium, “but she also created collages, drawings, wry cartoons, and videos; even her many suicide attempts were artfully documented.”

She Struggled with Mental Illness

The elder Litoff was talented and vivacious on the outside, but on the inside, she was battling with herself. From her teens, Ruth was into drugs, alcohol, and sex. When nothing was enough, she sought constant reassurances of love.

Ruth was diagnosed with bipolar disorder and struggled with depression all her life. Therapy, medication, and emotional support didn’t cure her, and she had attempted to take her life at least 20 times from the age of 16.

Though Hope doesn’t speak too highly of her parents, she admits that they did try to get Ruth the help she needs. “We thought that if Ruth just got the right doctor, the right medication, she would be okay. We were so naive,” she said. “I don’t think we could ever understand. Even the doctors didn’t know.”

Their mother was the one who always rescued Ruth at every attempt. “My mom was the one who would always be running to my sister’s apartment. If the phone wasn’t answered, my mom would be there. She saved her many, many times. I think without that relationship, my sister just couldn’t make it on her own.”

Ruth’s issues took a toll on her family. Unable to cope with being the “good daughter,” Hope took to drinking. To regain control over her life, Hope went to rehab three times, attended AA meetings, and couples therapy.

The film editor and mother of two began looking into her sister’s life in the documentary. During filming, the grief took over, and she relapsed into drinking again after 16 years of sobriety. But after the filming wrapped, Hope returned to the familiar path of sobriety.

She Set the Stage for Her Death

On December 12, 2008, Hope dropped by Ruth’s Manhattan loft and found her lifeless body in a bizarre setting. Ruth had decorated her apartment like a beautiful stage set with 15 suicide notes addressed to family and friends surrounding her. Her portraits were hung on the walls, and there were specially selected gifts for her friends.

After more than 20 attempts, Ruth had finally “succeeded” in ending her life. Ruth was 42 when she died, and the official cause of her death was an overdose.

Hope made the documentary to showcase the struggles of people coping with mental illness. She risked falling down her own rabbit hole while going through Ruth’s belongings in a storage unit. They also held a special screening of 32 Pills at the hospital.

The 48-year-old Hope’s husband, Todd is unable to watch the documentary because it’s too painful. While she understands, she believes Ruth would be very happy about this documentary. ”She would be happy that more people would be able to enjoy her art. She was always bold and honest about her struggles with depression and would be pleased to help anyone she could.”

While going through her journals and artwork, she found Ruth’s plans to hold an exhibition of her floral photography at the Bellevue hospital in New York, where she had received psychiatric treatment. Hope arranged for the exhibition, ‘Ruth’s Dream’ to take place in the hospital lobby.

32 Pills: My Sister’s Suicide premiered on December 7 on HBO.

Both a celebration of art and an exploration of mental illness, #32Pills: My Sister's Suicide premieres tonight at 8 on @HBO. pic.twitter.com/rgwEVdC7tV