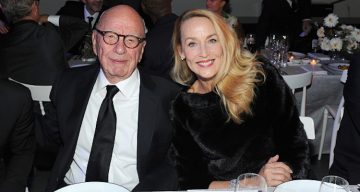 This 85-year-old media tycoon is undoubtedly one of the most powerful people in the media across the globe.

According to Forbes, the Chairman and CEO of News Corporation, Rupert Murdoch, has an estimated net worth of over $11 billion as of January 2016, making him the 77th richest person in the world.

In 2015, Rupert Murdoch & his family were ranked 35th on Forbes’ list of “The World’s Most Powerful People.” On January 11, Murdoch announced his engagement to his current partner, former fashion model Jerry Hall, 59, and the couple is set to marry in 2016.

After his father, Sir Keith Murdoch’s, death in 1952, the then 21-year-old Keith Rupert Murdoch commenced his journey into the news industry by inheriting his family business, a press company called News Limited, which had been established in Australia in 1923. Administrating a newspaper press at an early age, Murdoch began with just one newspaper in Adelaide and gradually acquired other native Australian publications before launching News Corp. in the U.K., U.S., and Asian media markets. Even though Murdoch entered the Australian television industry in the late 1950s, he permanently installed his roots in the film and TV show business by creating Fox Broadcasting Company in the U.S. in 1986.

In the face of several political oppositions across countries, Murdoch triumphantly managed to spread his dynasty and become one of the most recognizable and powerful men in the business world. The media titan who started by selling local tabloids in his early 20s went on to become one of the most feared people in the world with respect to his morals and virtues about depicting pure truth behind any global scenario.

Recently, the mega-billionaire announced his engagement to his current companion, model Jerry Hall, through a notice on The Times newspaper on January 11, 2016. The couple even appeared together at the recent 2016 Golden Globe Awards held in California. Hall, a former fashion model and cover girl, was previously in a relationship with British rock legend Sir Mick Jagger. Jerry Hall, who has four children with the Rolling Stones frontman—Elizabeth Scarlett, James Leroy, Georgia May, and Gabriel Luke—separated from him in 1999 after a decade of troubled courtship. Despite their long-term relationship, she was never technically married to Jagger, but she’s about to officially walk down the aisle for the first time with Murdoch this year.

Speaking of getting married for the first time, this isn’t Murdoch’s first marriage; the media tycoon has been married three times before. Murdoch’s marriage records include flight attendant Patricia Booker (1956 – 1967), Scottish journalist Anna Maria Torv (1967- 1999), and former Vice President of STAR TV Wendi Deng (1999 – 2013). From these marriages, Murdoch has a total of six children, and is a grandfather to thirteen. However, wealth inheritance won’t be an issue for any of these Murdoch heirs, as the media magnate is currently hovering high at a breathtaking net worth of over $11 billion as of January 2016.