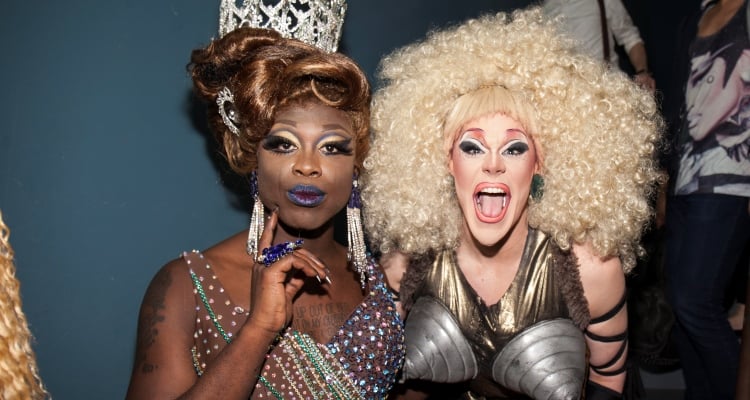 RuPaul’s Drag Race season 9 couldn’t be more jam-packed with drama, divas and drag! Not to mention the slew of exciting celebrities who will be featured throughout the season as guest judges! This season, permanent judges Michelle Visage, Carson Kressley, Ross Mathews, and RuPaul will be joined by celebrity guest judges: Lisa Kudrow, Cheyenne Jackson, Meghan Trainor, Kesha, The B-52s, Naya Rivera, Andie MacDowell, Tori Spelling, Jennie Garth, Denis O’Hare, Noah Galvin, Todrick Hall, Tamar Braxton, Lisa Robertson, Joan Smalls, Candis Cayne, Fortune Feimster, Jeffrey Bowyer-Chapman and Lady Gaga! It looks like the show has a full house of some of the best guest judges, and by the looks of the trailer, there’s plenty of drama, slaps and side-eyes in store for this season!

The Emmy-winning show is back for its ninth season and is welcoming a new crop of queens competing for glory. If you’re looking for information on the RuPaul’s Drag Race Season 9 cast, then scroll down and have a look at the list of royal beauties ready to be crowned Queen!

Aja, 22, is from Brooklyn, New York and according to her profile, she’s the number one queen people are talking about in Brooklyn. Aja’s colorful appearance has made her an instant Instagram hit and it’s no wonder her Drag Race competitors are nervous! She’s said to have a lot of energy, so you better step back if you don’t want to get hurt!

Jaymes, 26, is from Milwaukee, Wisconsin and is described as a “campy queen from America’s Dairyland.” This dairy queen was inspired by characters such as Pee Wee Herman, Elvira, and her namesake, Jayne Mansfield. According to her profile, she likes to think of herself as the “Swiss Army Knife” of drag. Jaymes can sing, dance, act, sew, and use puppets—but does she have what it takes to win this season?

Alexis, 32, is from New York, New York and is New York City’s top Broadway queen! She is known for her acting, singing, and her hourglass shape. She fell in love with the stage at an early age and sees drag as an extension of her true self and talents. The rest of the RuPaul’s Drag Race contestants better watch out when it comes to the acting challenges!

Charlie, 52, is from Boston, Massachusetts and is the oldest contestant to compete in the shows history. She’s an accomplished performer who splits her time between the U.S. and the UK. She describes her comedy as ‘rude, crude, and socially unacceptable.”

Eureka, 25, is from Johnson City, Tennessee and describes herself as loud, over-the-top and big. Her competitive nature may give her the edge she needs to win this season!

Farrah, 22, is from Las Vegas, Nevada and she comes with her own tagline— “Farrah Moan: One look and your mind is blown!” We can’t wait to see how far this social media queen gets.

Kimora, 27, is from Las Vegas, Nevada and has a love for strippers! She already looks to be one of the most eccentric of the bunch, and she thinks of Blac Chyna as her “girl.” Oh, and her greatest asset? Her Butt! She may just have the personality to win over the judges.

Nina, 34, is from Riverdale, Georgia and her look is based on fantasy. From zombies to aliens, this queen can adopt any look and she’s fierce when it comes to her makeup skills! She may be the one to watch out for.

Peppermint, 37, is from New York, New York and is described as sweet and sassy, making her a hit in New York. But will her charms work in Hollywood the way they did in The Big Apple? The stakes are higher on the RuPaul runway!

Sasha, 29, is from Brooklyn, New York and she describes herself as an “intellectual” queen. Could she be clever enough to win the judges over and win this season?

Shea, 27, is from Chicago, Illinois and sees herself as a high-class model that you don’t want to mess with. We can clearly see the Naomi Campbell influence on her, and her attitude is definitely worthy of a royalty! Let’s hope this “total package” has what it takes to beat the rest of the RuPaul’s Drag Race cast.

Trinity, 31, is form Orlando, Florida and is a competitive performer and a fan of plastic surgery. She’s won several crowns in different pageants and is looking to be crowned the next Drag Superstar on season 9 of RuPaul’s hit show.

Valentina, 25, is from Echo park, California and has only been doing drag for 10 months. She’s the least experienced of the bunch, but the sassy Latina queen plans to win this season. Could she be the underdog who takes the title? Check out the teaser trailer below, and tune in tonight to watch the queens go head to head!