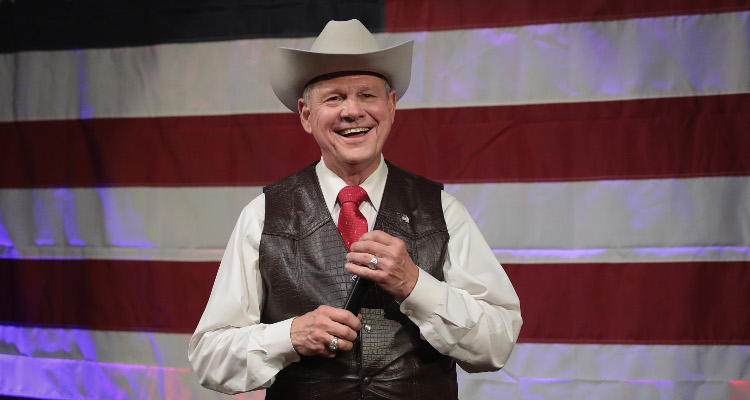 Roy Moore is the new GOP candidate who could be the next Senator of Alabama. The controversial figure defeated incumbent Senator, Luther Strange, who was backed by President Trump in the Alabama Senate race.

When Jeff Sessions left his position as Alabama Senator to serve as the U.S. Attorney General, he started the biggest race in the state to succeed him. Luther Strange, the incumbent senator who earned President Trump’s seal of approval, lost the GOP primary to Roy Moore.

The former judge is infamous for his firebrand opinions and could be a troublemaker for the Republican leadership should he become a senator. Here’s why the GOP’s senate candidate is considered controversial in Roy Moore’s wiki.

He Served in the Military

Moore’s parents, Roy Baxter Moore and Evelyn Stewart, met and married after Roy Sr. was discharged from the U.S. Army during World War II. They had five children—three boys and two girls—with Roy Moore Jr. being the eldest born in 1947.

He described his father as a hardworking construction worker, while his mother was a homemaker. His father worked for the Tennessee Valley Authority, building dams and the Anniston Army Depot.

The Moores could barely make ends meet. They moved from Alabama to Houston, then to Pennsylvania and back to Alabama, where Moore graduated from high school.

Moore served in several posts during the Vietnam War. During his time as a company commander in Vietnam, he earned the reputation of being very strict. In his autobiography, he mentions sleeping on sandbags to avoid a grenade being tossed under his cot by his disgruntled colleagues.

After he was discharged as a captain from the military, Moore enrolled at the University of Alabama School of Law in 1974. He graduated in 1977 with a Juris Doctor and returned to Alabama to work in a private practice. His legal career was full of ups and downs.

After he was acquitted of “suspect conduct,” he quit his job to run for the circuit court judge seat. After he lost the Democrat runoff primary, a disappointed Moore then traveled to Texas for a brief kickboxing career.

When he returned to private practice, the Etowah County circuit judge seat was vacant after the incumbent judge died. Upon his colleague’s recommendation, Moore was temporarily appointed to the post, which he later won in the 1994 election.

During his tenure, he was criticized for placing his hand-carved plaque of the Ten Commandments behind his bench and for starting court sessions in prayer. A lawsuit was filed, and the Montgomery County judge ruled the prayers unconstitutional, but allowed the plaque to remain. But Moore defied the ruling and vowed to continue his practices. The result was a long legal back and forth, which ended with Moore keeping his plaque in the courtroom.

His tenure as the Chief Justice of the Alabama Supreme Court was just as controversial for his comments on homosexuality and same-sex marriage. A long legal battle over a large Ten Commandments monument and his precedence for God in legal functioning led to his removal as Chief Justice.

During his second stint as Chief Justice, he faced several ethical violation charges. Upon his suspension, he resigned from the Supreme Court and announced his bid for the Senate in April 2017.

When Jeff Sessions vacated the Alabama Senate post, Luther Strange became Senator. President Trump both approved and donated to Strange’s campaign to become a Senate member. But in a blow to both the POTUS and Strange, Moore won the Republican Senate primary.

Moore’s net worth hasn’t been calculated, but he is known for winning elections against opponents who spend way more than him. Some reports claim that despite being suspended, Moore was rolling in money because he allegedly took $1.0 million from a charity he ran.

During his campaign, a certain speech made heads turn when he referred to an old children’s song and said, “Now we have blacks and whites fighting, reds and yellows fighting, Democrats and Republicans fighting, men and women fighting. What’s going to unite us? What’s going to bring us back together? A president? A Congress? No. It’s going to be God.” His words were considered unacceptable and sparked an outcry.

Despite advocating the GOP’s agenda—repeal of DACA (Deferred Action for Childhood Arrivals), Obamacare, and Planned Parenthood—he is not the Republican leadership’s preferred candidate for Senator. He advocates equating religion to law, has made heated statements against Muslims, defied court decisions, and said a lot of appalling things. His ideology has been a cause for worry for many Republicans, but made him a populist in Alabama’s politics.

His Wife Runs Their Charity

The 70-year-old is married to Kayla Moore, and they have four children—sons Caleb and Micah and daughters, Ory and Heather. Kayla Moore is the president of her husband’s Foundation for Moral Law. Her public rhetoric reflects Moore’s policy of giving precedence to religion in governance.

Their foundation was embroiled in controversy for not filing tax returns. Moore and his wife were also accused of using the money from the charity for personal purposes.

Caleb Moore served as executive director of the foundation. He was arrested several times for drug possession, DUI, and hunting. Although he has admitted to the charges, he claims that his father’s opponents are trying to derail his campaign by stirring up trouble.