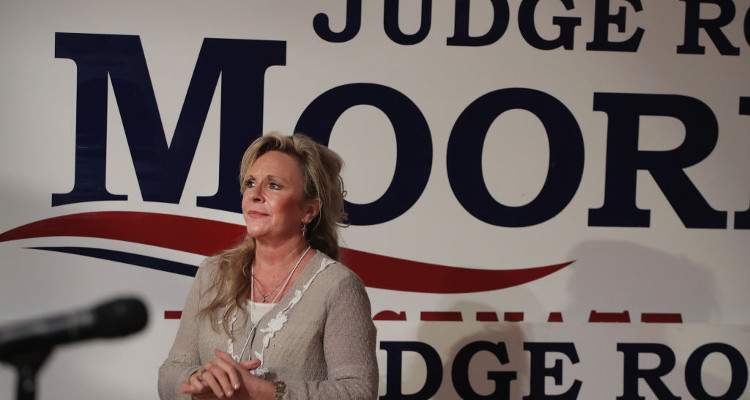 Republican Roy Moore has been accused of sexual harassment by four women, who were teenagers at the time, in the 1970s and 1980s. Moore has denied the accusations and has only his wife to back him up, as his party stands divided over the issue. Roy Moore’s wife, Kayla Moore, has been vocal about contentious issues and is a polarizing figure in many controversies. But will she stand by her embattled husband? Keep reading to know more about her in our Kayla Moore wiki.

Lately, there is no respite from the news of sexual harassment allegations against powerful men in high-level positions. The latest person to be accused of sexual misconduct is Republican Roy Moore.

He is currently working on his election campaign to win the U.S. Senate seat vacated by Jeff Sessions, who is now the Attorney General of the United States. He is up against Democratic Party nominee Doug Jones, a former United States attorney.

With all the negative publicity since the allegations were made, the spotlight has inevitably fallen on Roy Moore’s wife. Keep reading our Kayla Moore wiki to learn everything you need to know about her.

There is no information on Kayla Moore’s age, but she has been married to Roy Moore since 1985. They are very family oriented and have four children together; two sons and two daughters. Their children are named Caleb, Micah, Ory, and Heather.

Kayla Moore (née Kisor), is the president of the Foundation for Moral Law, an organization founded by her husband in 2002. The foundation’s self-declared mission is to “fight to protect the Constitution and protect the heritage of our country.”

According to sources, she graduated from Southside High School in Etowah County, Alabama, before attending Jacksonville State University, and the University of Alabama. Even as a youngster, she liked to be productive and was a bookkeeper for her father’s small business.

An Achiever in Her Own Right

Kayla Moore was her husband’s legal secretary when he was in a private practice, and is his closest confidante. She started her own company, KDM Marketing Company and worked hard on her husband’s political campaigns.

She has always been a beautiful woman. She competed in the Miss Alabama USA and Miss Alabama World pageants when she was just a teenager.

Roy Moore was always a controversial politician with his strong stand on contentious issues that divide Republicans. However, his wife has also raked up controversies over the years.

In February 2016 she wrote an op-ed for Alabama Local News’ website, in which she endorsed then-Texas Senator Ted Cruz for the U.S. presidency. She wrote that she could “trust” him to select conservative Supreme Court justices while at the same time criticizing the decisions made by the Supreme Court under Obamacare regarding same-sex marriage, calling it “lawless.”

Then in March 2016, she opposed the nomination of U.S. Air Force’s Col. Kristin Goodwin to the Air Force Academy’s Commandant for cadets because Goodwin was a lesbian.

Moore said at that time, “I oppose this nomination because Col. Goodwin does not set a proper moral example for youth. The person responsible for the education of cadets at the academy is a role model and an exemplar of proper deportment and conduct.”

Back Against the Wall

She’s made some other outlandish remarks that have also helped people form their own opinion on her. Kayla Moore has called former President Barack Obama a Muslim and shared a video called “Obama the Muslim, His Own Words” on November 18, 2015. Although her husband distanced himself from this video, it left the Republicans feeling embarrassed.

Now, she has to deal with the allegations made against her husband by at least four women who claim that Roy Moore sexually harassed them when they were teenagers. The allegations could derail her husband’s bid for the U.S. Senate, as some Republicans want him to step down from the race.

In Roy Moore’s hour of need, his wife, Kayla Moore might be the only person to support him through thick and thin.